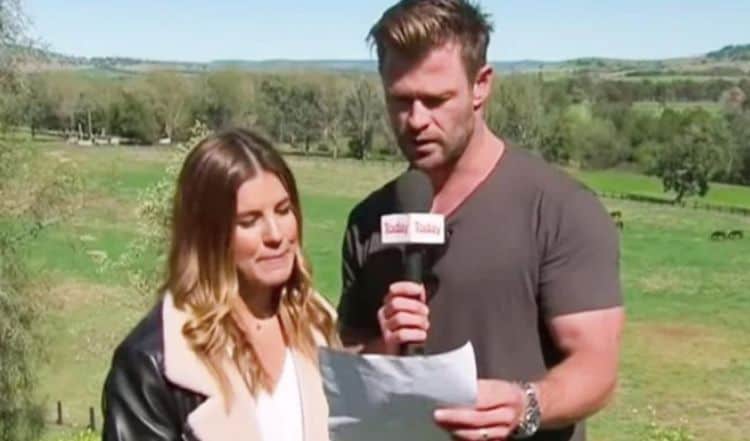 There’s nothing quite like a weather report rattled off by the MCU’s god of thunder Chris Hemsworth as he just happens to wander into a reporter’s camera space and begins to take over with her permission to read the weather for Australia. It’s definitely a different type of weather report than many people are used to hearing since in the states we tend to hear about various regions and areas within the continent while the report in this clip tends to skirt around the continent of Australia but still does about the same without really going into the interior. It kind of makes a person wonder just what the weather patterns are like in Australia and how widespread the climate is over certain areas. Of course, if we were to be given a closer look at the continent it feels likely that there would be a big difference between an up-close look than the view being given in the video. But the real highlight of this is the fact that the weather lady is obviously having a good time with the fact that Chris just showed up and decided he’d help out with the weather and to point out a few horses just to be a nice guy.

By all accounts, Chris is a pretty decent guy on and off set and he’s the kind of hard worker that a lot of people enjoy being around since he’s as professional as they come but can laugh at himself when the need arises as well. Just watch any blooper reel from the MCU and you’ll see that he can be just as funny as the rest of them, especially when something happens that wasn’t supposed to. Since he arrived on the scene Chris has been impressive since he’s been a great asset to many movies that he’s starred in, even those that haven’t done all that well at the box office. It’s true that he’s not quite the type of actor that can break a movie out of its own funk, but it’s not for lack of trying since he does put in a great amount of effort and he is one of those that people remember because he tends to be a lot of fun to watch and listen to. As Thor in the MCU, he’s been one of the greatest additions to the cast that anyone could ask for, and in other movies, he’s been just as great since he’s shown that he can be a diverse and very convincing character in many ways, though when he plays a bit of a doofus it’s enough to laugh since while he plays the part well it’s hard to believe.

His time in the MCU is quickly coming to an end it feels like Thor: Love and Thunder might be his last ride as a new wave of heroes will likely be taking over leaving only a few of those that were around for Infinity War and Endgame to continue forward. But it’s obvious that Chris will be headed on to other projects since he’s simply too young to retire and a lot of people would lament his loss from Hollywood in a very big way. But if he keeps showing up like this without any warning it’d likely be just as good since people love to see celebrities show up out of nowhere and start talking to them, especially someone like Chris who’s known for being a pleasant addition to wherever he happens to pop in. You can bet that this weather lady was having a good time standing there with Chris rattling off the weather since it’s not all that often that a big movie star just comes traipsing around, though this does have the feeling being a little contrived, even if the weather woman didn’t know much about it. Sometimes it’s obvious that stations and other shows will do this from time to time in order to bump up their ratings or just give their viewers a little something extra when they can as a way of saying ‘thanks for watching’. Even if that’s not the case and Chris just happened to be in the area, it was likely a nice surprise for those watching.

Chris Hemsworth definitely feels like a one of a kind actor that won’t be seen again when he’s gone for quite some time, but it’s likely that we’ll see those that are just as genuinely nice as he is since Hollywood has been changing quite a bit over the years and as it happens with every generation there are those actors that are bound to be a bit uppity and a little too egotistical to handle, and then there are those that are as down to earth as they can be and quite friendly.