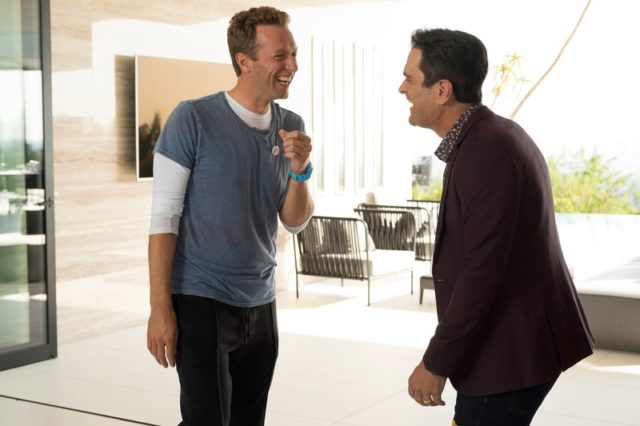 It’s going to be an adventure of a lifetime for Phil Dunphy. Entertainment Weekly has reported that Coldplay frontman, Chris Martin, will guest star on the November 29 episode of Modern Family. The episode titled, “Brushes with Celebrity,” will feature various family members unspooling their stories of crossing paths with famous folks, and as it turns out, Phil dealt with an “embarrassing health issue” while trying to sell a house to Martin. The report said that the role is more than just a cameo which means that Martin will play a significant role during the episode. You can see them having a great time together in the photo above.

According to a statement released by ABC regarding the episode, “The Pritchett-Dunphy-Tucker clan recount all their biggest celebrity encounters. Phil shows a house to his musical hero and is determined to make a good impression despite the intense pain radiating from a very inconvenient part of his body. Meanwhile, Jay’s day at jury duty takes an unexpected turn when he gets to serve it alongside one of America’s biggest football icons. Finally, Manny’s encounter with his favorite playwright and a celebrated actor and comedian don’t go exactly as you’d expect.” The episode was written by Vali Chandrasekaran and directed by Jeffrey Walker.Â

This much-awaited episode ofÂ Modern Family will air on Wednesday, November 29 at 9:00pm ET on ABC.