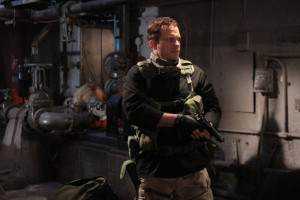 I know the show is called Chuck, but I am an unabashed John Casey (and Adam Baldwin) fan. Nothing makes me happier than a Casey-centric episode, so to me? This one was like Christmas in October.

Casey seems to have the worst luck with former allies. They all end up being bad guys in the end. I have to agree with some Chuck fans who agree that he ought to just round up all his old friends now and save himself some grief. For an upstanding soldier, Casey just seems to attract coworkers of lesser integrity. Is it just something about him? Whatever it is, I feel for the man.

This leads to an unorthodox assignment this week: Casey has to fake his own death. It’s an inventive plan, but I’m pleasantly surprised that the idea didn’t come from Casey himself, but from Chuck. Not only did Chuck suggest the fake funeral, but he’s the one who explains the intracacies of the plan to everyone else. He’s in the driver’s seat from the very beginning. Chuck has definitely grown as a spy, and it’s great to see him take charge of a mission instead of taking direction from others.

The fake funeral that follows is a great piece; Joshua Gomez nails Morgan’s hilarious fake eulogy, and the selection of “Dead Man’s Party” for the needle drop is perfect. Not to mention, who can’t love a line that ends with “before someone takes a blowtorch to his face”?

Casey’s subsequent abduction is no surprise (or it’d have been a really short show); what really matters is watching Casey stick it to his old colleagues, and even in a drugged-up state with a very un-Casey line like “I’ll be in the dumpster,” or in a Stormtrooper helmet, he’s still awesome. It reminds me of Weekend At Bernie’s, except for that no one’s dead.

As if that wasn’t enough, he also has to deal with finding out that Morgan is dating his daughter. Casey is the epitome of that dad standing on the front porch with the shotgun. (In fact, I think it’d be awesome if we saw a scene that had him doing just that.) His reaction to the news is priceless; Adam Baldwin gets kudos for being able to convey absolute rage without a word or movement – at least until Casey comes out of his drug-induced state and chokes Morgan. You knew some bodily harm was coming.

Speaking of bodily harm, Casey and Morgan have to rescue Sarah and Casey from the bad guys – who claim that Chuck’s mom is Volkoff’s fixer. This doesn’t go well at first; Casey gets captured and Morgan gets shot. Yet it’s Morgan who saves the day, even if he knocks himself out in the process (he dies for all of three seconds). Looks like Morgan gets to evade the Wrath of Casey awhile longer. Not only that, but he’s still got Alex and he gets Casey to show up to his party. I call that a major win, which is also what I call this episode.

For a thorough rundown of tonight’s action, you can catch Michael Salerno’s recap. As for me, I’ll be putting together my Buy More green shirt Halloween costume. See you next week!