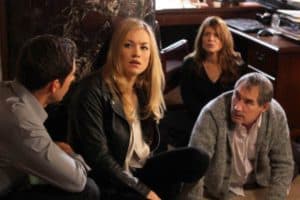 I’ve got a special treat for your weekend, Chuck fans: an early look at Monday’s new episode! You know that anything that involves Sarah Connor and James Bond is pretty much expected to be awesome.

Chuck and Sarah are fighting after he saw her abduct his mom in the last episode, but we learn quickly that it was the right decision: Mama Bartowski has been a rogue agent for twenty years. The General plans to have her shipped to a secret “black site” the following morning, giving Chuck little time to do anything about it. During a very unauthorized chat, Mama Bartowski tells Chuck to look up her MI6 handler, Gregory Tuttle, and…well, you know where this is going.

Chuck and Morgan go to meet with Tuttle, who insists that “I’m not a trained field agent,” which is sure to induce snickers. That’s obvious when both he and Chuck are tranquilized by Volkoff’s operatives while Morgan is in the restroom. The resulting interrogation will likewise provoke a knowing laughter, as do several lines throughout the episode. Dalton is playing more Simon Skinner than James Bond, and the writers play with that every step of the way. And did I mention there are sheep?

The rest of the team brokers a deal: Mama Bartowski gets to see Ellie if she helps the team find Chuck. The reunion that follows is well worth the wait, and a great showpiece for the underused Sarah Lancaster. Mama Bartowski clues Ellie into not only what really happened, but the last message that Papa Bartowski left for her in the classifieds, which references the 1968 Mustang they once owned. Ellie and Devon set out to recover the car, and Papa Bartowski’s last secret.

Chuck and Tuttle are eventually reunited with the team when everyone’s mixed up in an apparent bank robbery, which is just a cover for Volkoff’s continued attempts to kill them. While it seems like that’s the big setpiece for the episode, the action truly engages in the final act. Without spoiling anything, I will say that while I saw everything that happens coming, it was still breathtaking to watch. The final two scenes alone will get even the most cynical of Chuck fans choked up. This episode will change quite a few things as you know them, so don’t miss it.

Enjoy your weekends, and come back here Monday night to check out our coverage of “Chuck Versus The First Fight,” which airs Nov. 1 at 8 PM ET/PT on NBC.