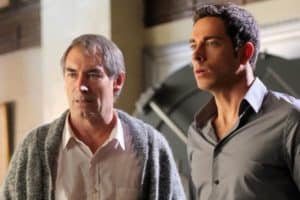 Finally! Now I can chat about all the things I didn’t want to spoil in my advance review. Yet wasn’t I right, Chuck fans? Wasn’t this an awesome episode?

I’m usually very wary of episodes that get a lot of advance hype, especially those with “big name” guest stars, because a lot of times they don’t live up to the expectations that are created. However, this episode of Chuck satisfied all those expectations and then some.

A lot of buzz is going to be about the performances of Linda Hamilton and Timothy Dalton, and deservedly so. Hamilton has shown exactly why she was the fans’ choice for the role of Mary Bartowski all season. Dalton seemed to be having a great time riffing on his James Bond days; he did everything but wink knowingly at the audience, as he – and the writers – knew we were all in on the joke. That, of course, changed by episode’s end when we realized he’s this season’s villain, but it was great fun while it lasted. I can only imagine he’s going to play Volkoff just as well.

The real shining star for me, though, was Sarah Lancaster. As my colleague Michael Salerno put it once, I’d gladly trade for more Ellie and Awesome. Their reasonably normal relationship provides a nice contrast to Chuck and Sarah’s spy life, and the bond between Chuck and Ellie has been a hidden gem within this series from the pilot. Scenes between Ellie and Chuck are always a highlight. The reunion between Mary and Ellie is perfectly played by both actresses; personally I think it’s the best scene in the episode. Between that and figuring out her father’s final message, Ellie finally gets a lot to do this week, and Sarah Lancaster makes the most of it.

I also enjoyed how Sarah and Chuck’s relationship fit much better into the plot in this episode than it has in previous ones this season. I’ve commented before that the subplot has seemed forced, but here their lack of trust in one another contributed to their actions in the main storyline. It might have been a little ridiculous to have them arguing while trying to escape the bank, but overall, the two things combined much more seamlessly this week.

I was not all that surprised that Mama Bartowski vacillated between good and evil again, nor was I shocked that Tuttle turned out to be Volkoff. At this point, I’m with Sarah; Chuck’s mom has proven to be nothing but trouble for him, and with as much back-and-forth as she’s been doing, I have no idea why he still trusts her. I get that being his mom probably provokes some sentimentality, but were I Chuck, I’d have said goodbye to her a long time ago. Furthermore, as funny as it was, Tuttle just seemed too inept and too aloof through parts of the episode. I knew there had to be something more going on with him or he wouldn’t have been working with Chuck’s mom in the first place; he wouldn’t have been able to hack it. (That, and NBC leaked a long time ago that Dalton would have a multi-episode guest arc, so I knew he wasn’t just going to turn up, lampoon his Bond role, and die.)

Regardless, I definitely got choked up watching the big explosion at the end, knowing how much Chuck and Co. had lost in it. By the time Ellie found her dad’s Mustang and was reading his farewell letter, I was bawling. Chuck certainly knows how to pull at the heartstrings, and this episode did that perfectly.

It might not have been totally novel, but “Chuck Versus The First Fight” was an exciting watch that only made me more curious to see what happens next. You can’t ask for more than that from a TV show.

For another point of view, check out my wingman Michael Salerno’s recap. I’ll see you in two weeks. Both Chuck and I need a break!