Home
Chuck
Chuck 4.08 “Chuck Versus The Fear of Death” Review 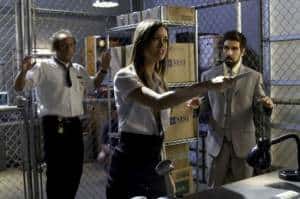 Chuck returns this week with an episode that started slow and ended strong, exploring an Intersectless Chuck by spending the hour trying to scare him into breaking the suppression device that Mama Bartowski had used on him. The Buy More story of the week was more fluid actually using the CIA Greta for more than just visual gags as has been done previously with the likes of Olivia Munn and Isaiah Mustafa.

This weeks Greta was played by Firefly and Terminator: The Sarah Connor Chronicles alum Summer Glau who was reunited with her former co-star Adam Baldwin and despite the Great role being an excuse for some guest stars it felt like it worked this week. I also really enjoyed the growl off between Casey and Greta at the end after he dismissed her, a good growl from Casey always raises a smile so this was twice as brilliant. Jeff and Lester were given the chance to show off their excellent stalking and surveillance skills, the Subway product placement didn’t feel too out of place and even though the Buy More staff are not necessarily the brightest it was good to see them question the role of the Greta as much of the audience has been.

The other guest star of the week was Rob Riggle, a favourite of mine from his correspondent days on The Daily Show who played Agent Rye, tasked with removing the emotional rock that was suppressing the Intersect. The idea that it was an emotional rock that had to be moved was apt considering that Chuck’s issues with the Intersect are often emotion based and often to do with Sarah, even if it felt a little tired that it was Sarah who was the one stopping any success in the treatment that Chuck was receiving. The debate over whether Chuck is a spy with or without the Intersect has been done before and the argument between Sarah and Chuck regarding his abilities was the most uncomfortable to date and was well played by all in the scene to show this discomfort.

Chuck is always strongest when it is about the team and when the team is fractured this reinforces the need for this unity. We all know that Casey is sentimental beneath his hard exterior and I enjoyed the scene with Alex where he reveals how he feels about his team and that his unhappiness was not just about his ‘itchy trigger finger’. I am a sucker for this team stuff so I really got some chills when Casey and Morgan vowed to help get back Chuck to a tearful Sarah who was about to go out alone to find him.

This declaration makes me very excited for where next week will take us to get Chuck back and whether he will still be missing the Intersect or not. He started the episode strapped down in a friendly A Clockwork Orange scenario and ended it one step a way from a torturous time, things are not going to get easy for Agent Carmichael. This episode definitely felt the first of a two parter and suffered from not really getting going till the final act; though this final act was some of the strongest work we have seen this year and the cliffhanger leaves me very excited for next week.

What did you all think? Enjoy this weeks Greta? Is Chuck a spy without the Intersect? Let us know in the comments below or join us in the forum, and be sure to check out Michael Salerno’s full recap here.