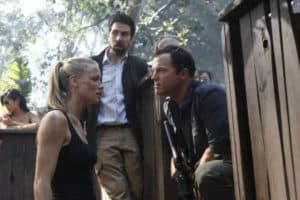 “You got me, I’m just a needy crazed girl on a husband hunt, who’s trained in over 200 ways to kill you.”

Sarah Walker is anything but needy and this excellent instalment of Chuck showcased the lengths that Sarah will go to, to save Chuck, going above and beyond and breaking several international laws to do so. Josh Schwartz promised us an episode of Sarah Walker kicking ass and boy did it deliver, with some added emotional icing to top this perfect Chuck cake.

Yvonne Strahovski as Sarah played not only an ass kicking super spy this week, but also showed a wide range of emotions from desperation to unstoppable that bordered on the scary, with even Casey commenting on how he didn’t like that ‘Sarah Walker’. Sarah Walker the spy and Sarah Walker the girlfriend were at odds with each other, clouding her judgement and leading her to going rogue and solo whilst locking Casey in one of the Castle holding cells. This going alone led to one of the great moments and gags of the episode; with Sarah down on her knees and sand in her eyes looking like she was to be defeated in a fight, Casey and Morgan turn up to save the day, turns out Casey is a regular at this illegal fighting ring which is home to some of the worst people on earth. I was glad to see that Sarah finished the fight and it allowed for an excellent display from Strahovski and the stunt team. Later there was also a welcome return of Morgan playing ‘The Magnet’, this time providing a decoy as a lost and probably stoned backpacker tourist.

After such a physical sequence of scenes, including a nice reference to Apocalypse Now, the pay off with Chuck being brought back from his memory wipe by Sarah was like a happy alternate Eternal Sunshine of the Spotless Mind. I was worried that Chuck would have his memory wiped which as a troupe really does feel like it has been done more than needed, so I was pleasantly surprised that this was not the case. Sarah’s full declaration of love was the one that has been a long time coming, and coupled with Chuck remaining a spy without the Intersect working will hopefully lead to less emotional and self worth worries from Chuck. It would seem that anxiety really isn’t the key to bringing the Intersect back, fear of death was tried last week and his loved ones used this week with neither working. Could this confidence in Chuck without the Intersect be what brings it back?

The B story of the episode involving the mysterious Rourke computer found in Papa Bartowski’s car and Awesome trading medical expertise for computer knowledge from Jeff and Lester worked well with the main plot. Though it seemed obvious that Ellie would be key in getting it to work seeing Awesome having to delve in to the dark places of Buy More staff was an equally funny and hideous thought, and it’s always fun seeing Awesome not being awesome. What the ‘Oh my god’ at the end signifies is unclear, though if it means potentially more from the Scott Bakula then I am definitely in.

This was a really strong week for Chuck and I’m really glad to see Sarah-centric episode that puts her up there with some of my other favourite ass kicking women such as Sydney Bristow (Alias) and Buffy Summers (Buffy the Vampire Slayer– and don’t even mention the reboot). I think this episode also opens up avenues for much more expansive story telling with Chuck being without the Intersect, and knowing that he has a certain amount of confidence from the others to be a spy without his special skill set.

What did you all think? Enjoy this much Sarah as I did? Excited to see what an Intersectless Chuck can do? Let us know in the comments below or join us in the forum, and be sure to check out Michael Salerno’s full recap here.