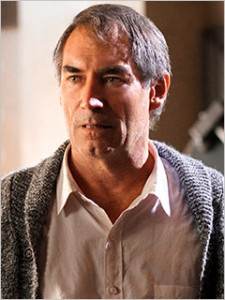 Last week Chuck was warm hearted, romantic and fun but with the twist that Sarah was going undercover at Volkoff Ltd. this episode took a darker turn. For those wondering why the pacing may have seemed a bit erratic this season, like last year the original episode order for Chuck was 13 episodes and happily on both occasions more have been ordered during the season. Alan Sepinwall discussed this with Josh Schwartz and Chris Fedak and it is well worth checking out here.

On to the episode and the dark turn is shown physically in the transformation of Sarah who has dyed her blonde hair black (or is it a wig?) and appears to only have leather and ‘shag me’ boots in her double agent suitcase. I was pleased to see Sarah being a total badass again and it is always a pleasure to see her in fight scenes (except with Casey of course) but I also appreciated seeing that she is emotionally vulnerable no matter how much distance there is between her and Chuck. The couple of goofy romantic moments between her and Chuck reminded us of this and showed that she can try and turn off these emotions but Chuck will always bring it out of her.

Another goofy romantic is Volkoff himself and once again Timothy Dalton is terrific playing both the humour and disturbed qualities of this character. The painting of the dog was hilarious but equally the shooting and eye removal of ‘The Gobbler’ was truly horrifying and had me squirming in my seat. Volkoff has been a terrific bad guy, my favourite by far in this show and I wish there was a way for Dalton to stick around longer. Hamilton was also good this week, acting as a mentor to Sarah as the woman who has been there before.

The Casey/Morgan relationship has become a strong aspect of the show, especially whenever Alex is involved and provided much of the humour and heart of this week. The two men have very different ways of showing love, for Morgan it is not worrying about his Back to the Future t-shirt, Casey it is about stealth shelf building; both clearly love Alex and have an excellent bromance that is less than conventional.

One issue this week was that because there was so much going on in the main story that every time it cut to the Ellie/Awesome story it felt a little jarring, whilst I was happy to see them and it was a sweet and funny distraction it was still a distraction. The reason why Morgan has become a favourite character of mine is because he is now immersed in the spy world and I wonder whether it is possible for them to do this with any of the other supporting characters? Awesome has teetered on the edge of this and there was the possibility of Ellie doing the same but with impending parenthood is this likely to happen?

This definitely felt like a table setting episode, moving all the players in to the correct position for next weeks big event and whilst I enjoyed it on the whole it didn’t leave me with the same satisfied feeling as last week. What did you all think? Like Sarah’s new look? Think that Timothy Dalton is brilliantly funny and disturbing as Volkov? Worried about Casey? Let us know in the comments below or in our Chuck forum and for a more in depth look be sure to check out Michael Salerno’s excellent recap here.