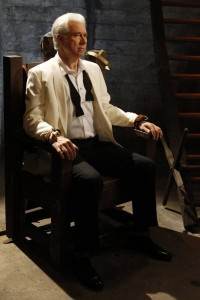 After last weeks end to the Volkoff arc I wondered how we would kick start this second half of the season, and I’m so glad to say that this was perhaps the most fun stand alone episode of the year. The return of seduction master Roan Montgomery played brilliantly by John Laroquette certainly added to the fun and whereas the last time he appeared Chuck and Sarah were only fake boyfriend and girlfriend, this time around they are newly engaged and are embarking on new issues in their relationship.

This new problem is how they should get married; Sarah’s preferred choice being to elope whereas Chuck is all for the big family wedding, no matter how overbearing his family are regarding the wedding plans. This idea was perfectly executed in the opening scene where the fuss over the new born Clara is enough to make any baby cry and make any spy want a new mission. The Chuck/Sarah relationship has come far since Laroquette appeared back in season 2 and his advice of never going on a mission angry seems to be something they can definitely learn from. This was an occasion where their relationship issues during a mission added to the comedy, particularly Chuck’s counter mission of the ‘practice no’ which ended up with him saying no to things he really shouldn’t.

Communication is a hurdle in any relationship and Chuck and Sarah definitely embody this problem, with both being as neurotic as each other with regard to this stuff. It was particularly good fun to see them both trying Roan’s seduction tactic to turn a no in to a yes with Sarah wearing the belly dancer outfit that she declared that she wouldn’t be wearing for the mission in Morocco. I’m sure this scene was a big hit with many viewers who would definitely have a hard time saying no, Chuck didn’t look too shabby in his suit either.

There was some great Casey stuff this week after he spent most of the previous episode in a hospital bed. He got to hide in a wall which has been mentioned as a skill before, disarm four soldiers through the wall and he was prepared to go all Aron Ralston and cut off his own arm after he became trapped in, yep you guessed it, the wall. I’m glad that Casey and Roan still really dislike each other, after all seduction seems to be the only spy class that Casey failed at (and twice) and that really subduing and exploding are two of Casey’s best spy skills. From a more emotional stand point the issue of Alex’s mother not knowing that he is alive is something that I’m glad that they have returned to, and as Alex becomes a more prominent fixture seems like something that they will further address by the end of the year.

Two other love stories were covered, firstly that of General Beckman and Roan who had the 80s cheesetastic track ‘Wind of Change’ by Scorpions as their love theme. Is there anything more frightening than seeing the General with a rocket launcher bringing down an evil criminal organisation for the man she loves?! Seeing the General flustered and resorting to day time whiskey drinking was an interesting new take on the character as well as seeing her out in the field as the Berlin wall came down. The other love story was such a small part of the episode, but was a very tender moment as Mary read Sleeping Beauty to the baby and recounted her own Sleeping Beauty moment, turns out her Prince Charming was a certain Stephen Bartowski.

The final scene suggested that there are still some major hurdles that Chuck and Sarah will have to overcome before ‘the big day’, especially in regard to her letting him in to her protective wall around her past. There was something slightly ominous and uncertain about the end of this episode as Chuck promised to do what ever he could regarding her family, what else is there left to discover about Sarah’s past?

What did you all think? Enjoy the return of John Laroquette? Interested to see more of General Beckman in her days in the field? Think that Casey will reveal the truth to Kathleen by the seasons end? Let us know in the comments below or join us in the Chuck forum. Be sure to check out Michael Salerno’s full recap here.