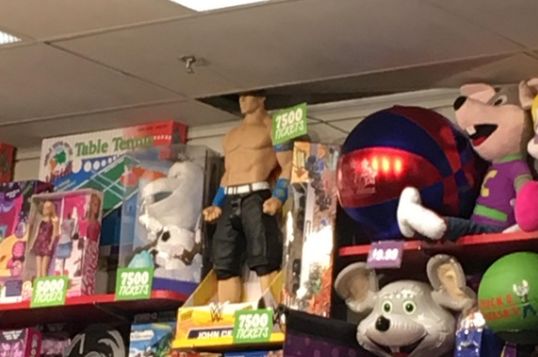 Someone at Chuck E. Cheese obviously has a ton of respect for John Cena.Â  Over the weekend someone took this picture at one of Chucky’s locations.Â Â  At this particular location if you win enough tickets you’ll have the opportunity to purchase numerous prizes but perhaps nothing as special as this John Cena doll.Â  The doll is so special that employees made room for its head which the ceiling was unable to accommodate.Â Â  P.S. who in the world is buying this John Cena doll?Â  It’s a couple of sizes away from those new humanoid robots that will eventually be taking over the world in a couple of years.

In other John Cena news, let’s give him a warm round of congratulations on his engagement to Nikki Bella.Â  Cena used Wrestlemania 33 as a forum to get engaged to the “Total Diva.”Â  It looks like Cena’s ready to settle down which more than likely means less time in the ring, more time at the movies, and a plenty of time to start a family where they will undoubtedly engage in a number of visits to none other than Chuck E. Cheese.