Chuck Lorre has always loved his title cards, and we all know that one of them (“If Charlie Sheen outlives me, I’m gonna be really pissed”) helped to kick off one of the wildest and most bizarre feuds we’ve ever seen.

Lorre has been mostly quiet about Sheen’s cuckoo bananas antics, but after tonight’s new episode of The Big Bang Theory, here’s what Lorre had to say, again via title card: 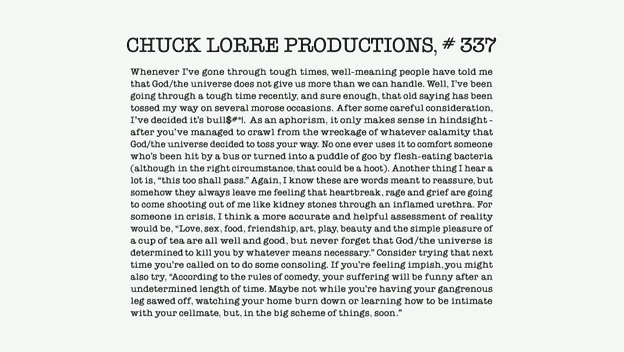 Whenever I’ve gone through tough times, well-meaning people have told me that God/the universe does not give us more than we can handle. Well, I’ve been going through a tough time recently, and sure enough, that old saying has been tossed my way on several morose occasions. After some careful consideration, I’ve decided it’s bull$#*!. As an aphorism, it only makes sense in hindsight — after you’ve managed to crawl from the wreckage of whatever calamity that God/the universe decided to toss your way. No one can ever use it to comfort someone who’s been hit by a bus or turned into a puddle of goo by flesh-eating bacteria (although in the right circumstance, that could be a hoot). Another thing I hear a lot is, “this too shall pass.” Again, I know these are words meant to reassure, but somehow they always leave me feeling that heartbreak, rage and grief are going to come shooting out of me like kidney stones through an inflamed urethra. For someone in crisis, I think a more accurate and helpful assessment of reality would be, “Love, sex, food, friendship, art play, beauty and the simple pleasure of a coup of tea are all well and good, but never forget that God/the universe is determined to kill you by whatever means necessary.” Consider trying that next time you’re called on to do some consoling. If you’re feeling impish, you might also try, “According to the rules of comedy, your suffering will be funny after an undetermined length of time. Maybe not while you’re having your gangrenous leg sewed off, watching your home burn down or learning how to be intimate with your cellmate, but in the big scheme of things, soon.”

Sounds like he’s taken some time to reflect on everything and is almost at the point where he can look back and laugh. We’ll have to see if Sheen responds. If he does, we’ll let you know.