Sarah heads down to South America to track down a kidnapped Chuck and heads into the ring to kick a little ass. Below are promo photos, a short synopsis and a promo for the November 22 new episode of Chuck. 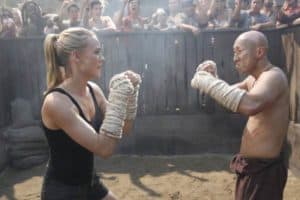 CHUCK’S SECRETS AND SANITY ARE THREATENED, LEADING SARAH TO SET OFF ON A ROGUE MISSION