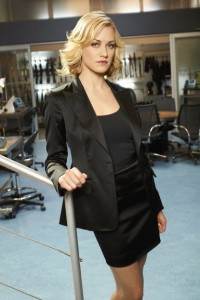 Chuck season 5 swaddles up its eighth entry with this week’s “Chuck Vs. The Baby” as Chuck and Sarah delve into the past by confronting her rogue former CIA handler (Tim DeKay) over a missing child involved with one of her last missions. After some strong weeks “Baby” may offer up a bit of tonal whiplash in its contrasting plot lines, but ultimately comes together for a solid look into Sarah’s mysterious past.

Sigh. With another holiday week gone by, NBC dumps yet another Chuck episode to the no-man’s-land of Friday, New Years’Eve Eve. With most still on vacation or at the very least enjoying a Friday night social life, how little must NBC’s regard for Chuck have dissolved to burn off yet a second important episode during a time least likely to be watched?

Unlike last week’s “Chuck Vs. The Santa Suit,” I had actually been aware of this episode airing ahead of time, but still managed to forget until returning home from a late night viewing of The Girl With the Dragon Tattoo, which may or may not have colored how I react to more light-heated espionage.

As a critic, one of the toughest aspects of responding to something as unevenly balanced as “Chuck Vs the Baby” lies in splitting the difference between what works, and what doesn’t to see things not only in the context of an hour, but in the series’continuity at large. I wanted to like ‘Baby,’I really did, and both Sarah and Yvonne Strahovski were long overdue for some attention in season five.

Toward that end, I spent much of the first half hour of ‘Chuck Vs. The Baby’in increasing annoyance of yet another pre-Chuck story shoe-horned into an already delicate continuity, a problem only exacerbated by an inherently superfluous and sugary B-story, until I was struck with a concession of acknowledged detail that nearly made up for it. Longtime and over-analytical Chuck fans know that its supporting spy characters maintain dubious histories at best, with Chuck flashing back over the years to multiple self-contained backstories that don’t always seem to gel with one another. 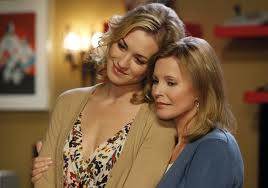 For instance, we’ve now seen Sarah’s past to include a con-artist and high school history with her father, a partnership with Bryce Larkin, time spent on the ‘CAT Squad,’and now as an agent handled by Kieran Ryker (White Collar‘s Tim DeKay*) and keeping close ties to her mother, all immediately before moving to Burbank as Chuck’s handler. ‘Chuck Vs. The Baby’ultimately offers up passable explanation for why Sarah’s kept information about her mother so close to the chest all these years, but that doesn’t quite eliminate the feeling of stagnation that develops from writers clearly squeezing in afterthought backstories.

(*) As most TV viewers and critics would be quick to note, Tim DeKay currently stars on USA’s White Collar opposite none other than Matthew Bomer, best known as Chuck’s Bryce Larkin. DeKay’s availability would suggest that Bomer himself might be free for a pre-finale Chuck appearance (despite his character’s death), but even if that winds up the case, Chuck has managed to keep some of its better cameos under wraps, a few weeks ago with Yvette Nicole Brown and here with Tony Todd.

For the record, I’d like to point out that Bryce had something of a comic-book death in that we last saw his actual body being nefariously dragged away, despite the ‘ashes’Sarah later carried. Not only has Bryce been ‘dead’before, but Shaw was revived from near of the exact same wounds fatally inflicted on Bryce. Just sayin’. 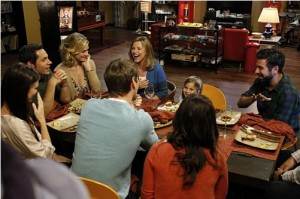 On the other hand, my feelings on ‘Chuck Vs. The Baby’did, however briefly, flip at the thoughtful inclusion of Tony Todd reprising his role as CIA Director Graham from the first season, and the rather tangential B-story being woven into the saccharine happy family sequences at episode’s end that Chuck does so well. It reminded me that Chuck as a series will always provide that relationship we fondly remember in later years; too unique to truly last and packing plenty of flaws, but sweet enough that most of them will fall by the wayside when viewed in the light of aging wisdom. To that end, I’ll put aside my irk for the more questionable aspects of Chuck‘s chronology and logic, and put the darkness of Stieg Larsson and David Fincher out of mind before judging any further.

As I mentioned earlier, Chuck season 5 had been somewhat in need of more Sarah-centric stories, to the point where my readers even pointed out that the character received few-to-little mentions in episode write-ups. To that end, ‘Chuck Vs. The Baby’proves a relatively strong outing for both Sarah and Yvonne Strahovski, who deftly handles switching between a maternally inexperienced yet remorseless killer, and the Sarah we know today inching ever closer toward domestic bliss with her husband. I don’t know that any further Sarah backstory adds much to the overall mythology of the show , especially with most threads seemingly resolved and only five episodes of Chuck to go, but bless the writers for finding ways to remind us that Strahovski and Sarah offer up more than a pretty face aiming down the barrel of a big gun. 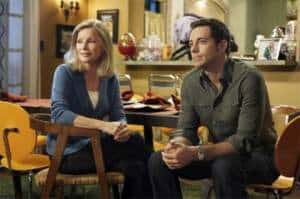 It is interesting to consider where Chuck will go for its final five episodes, considering the ‘CIA conspiracy’and Shaw** behind it have most definitely fallen by the wayside, but we can remain confident that series co-creators Josh Schwartz and Chris Fedak made the most of their thirteen episode order, with very little to stand in the way of crafting complete andsuccessful arcs.

Whether or not it winds up affecting the story’s climax, Sarah’s arc has remained clear throughout the series as a woman denied childhood and a life of her own, who slowly comes to accept a world outside of espionage, and ‘Baby’puts a nice focal point on that with Sarah’s young ‘sister’Molly.

(**) Less of a complaint and more of a question, but did anyone pick up on what exactly tied Shaw to Ryker or the baby plot? We know that Shaw only first met Sarah and turned rogue in season 3, so how did he manage to uncover Sarah’s history with the baby, when Ryker apparently couldn’t?

Last week’s ‘Chuck Vs. The Santa Suit‘also carried the added bonus of integrating its B-plots into the narrative better, as this week cutting between a tense, history-filled mission and the supporting characters playing board games in a militarized installation felt rather jarring. Awesome and Ellie have certainly received their due this season in co-habitating in Chuck’s world, but I can’t help feeling like the uneven tone did damage by making ‘Baby,’aim high and low simultaneously. Yes, there’s cuteness to seeing Awesome and Ellie continue utilizing Chuck’s spy lifestyle for some romantic roleplay, and we knew something would have to shove Morgan and Alex (Mekenna Melvin) back together eventually, but we’ve seen these parallel threads woven together much more carefully in the past.

By the same token, cynics and diabetics might not be able to stomach the overly saccharine last act of ‘Chuck Vs. The Baby,’with its gratuitous O.C.-style montages, Alex and Morgan’s reconciliation, Awesome and Ellie’s flowers, and the sweet Chuck and Sarah moments dreaming of their future, but Chuck was bound to stock up on sugar in its final run. There’s still plenty of room to surprise us before the end.