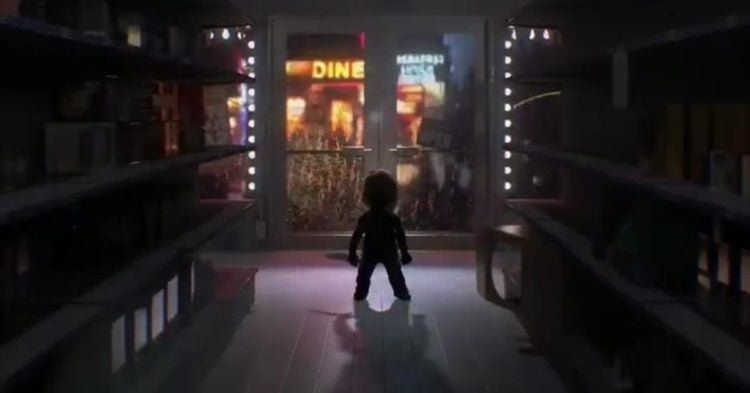 Back in 1988, the world was introduced to a seemingly innocent Good Guy Doll who was anything but. Inhabited by the soul of a serial killer named Charles “Chucky” Lee Ray (Brad Dourif), the murderous doll stops at nothing to take over the body of his new owner, a young boy named Andy. This first film, Child’s Play, took the idea of a haunted doll formerly seen in shows like the Twilight Zone episode Living Doll and amped up the violence and personality to slasher flick levels. Armed with a sharp knife and a sharper wit, the character of Chucky evolved well past the original concept, branching off into a seven-movie series all written by creator Don Mancini where Chucky finds a wife, has a child, and even starts a cult. A far cry from his meager origins. Until now. Premiering October 12th, 2021 on the USA and SyFy Networks, Chucky the series will deep dive into the maniacal misadventures and early years of the titular killer doll. According to IMDb, the show is a continuation of the events of the last film in the series Cult Of Chucky when “a vintage Chucky doll turns up at a suburban yard sale, an idyllic American town is thrown into chaos as a series of horrifying murders begin to expose the town’s hypocrisies and secrets.”

Having dropped its first teaser trailer a few months back, very little was given about what the series would be about. This week, a second teaser gave audiences a slightly longer look into the show, but little in terms of plot. Although, according to Entertainment Weekly, Don Mancini was quoted as saying:

“The main character is a 14-year-old gay boy who’s bullied and sort of lost after the recent death of his mother. He’s a young artist [making] sculptures with doll parts. He finds Chucky at a yard sale and buys him, but it turns out that he gets much more than he bargained for. One of the things I wanted to do was bring [the franchise] back to its Child’s Play roots and have the protagonists [be] kids. But since, with the first couple of movies, we’d already delved into having little kids I wanted to explore something different, so this time we’re exploring young teenagers.”

A definite departure from some of the more radical ideas found in the later sequels such as Bride Of Chucky and Seed Of Chucky, where Charles Lee Ray is reunited with his former lover Tiffany, played by Jeniffer Tilly, who finds herself trapped in a female doll only to join Chucky in a quest to find a young couple to take over and eventually giving birth to a doll of their own (Yeah, the series kinda went off the rails with Seed Of Chucky). Trying to recapture the mythos of the character, the final two installments bring Chucky back to his roots as a stealthy killer, while peppering in hints of the previous films’ more cartoonishly silly elements, all the while tying them together into a continuous narrative. Not to say that the idea of a killer doll isn’t a bit ridiculous, the tonal shift from film to film did sit differently with many fans.

The new series does its best to bring back old characters such as Jeniffer Tilly as Tiffany, Alex Vincent reprising his childhood role as Andy, and Fiona Dourif (daughter of Brad), Chucky’s final victim in the last two installments of the films. Newcomers to the franchise include Devon Sawa (Final Destination), Zackary Arthur, and Lexa Doig. Going through the cast list, one might find hints into some of what is in store. For instance, actor David Kohlsmith (Shazam!) is slated to play a young version of Charles Lee Ray, eluding to the unveiling of the actual Chucky origin story. Little touches such as this could really rein in the comedic routes the films took before righting the ship back to a more horror film format in the final two ventures. Not to say that Bride Of Chucky doesn’t have its moments with the help of Tilly, who became an integral character to the point of her reprising Tiffany in every iteration since. Seed Of Chucky on the other hand has become the red-headed stepchild (pun intended) of the films, never really being referenced later on.

The Child’s Play films, love them or hate them, have etched themselves into the ethos of modern horror fare and seem to be a labor of love for writer Don Mancini, excluding the reboot from 2019 (not involving Mancini) which, in my opinion, is a completely different film and only glams onto the property’s name and defiantly not the likeness with its atrocious doll design and A.I. plotline. That lame business aside, the new Chucky series seems to be a return to form for the franchise, bringing back the scares, gore, and over-the-top camp we’ve grown to expect from the films. So, sit back, relax, and watch the newest trailer for Chucky.