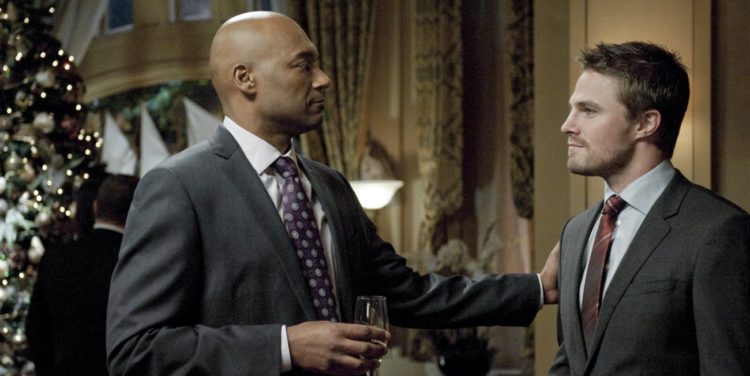 Colin Salmon is an English actor that is best known for his role as Charles Robinson in three James Bond films. He has also worked extensively on British TV. Here are ten things about him that you may not know.

1. He Was In A Band When He Left School

When he first left school he was in a punk band called Friction with some of his friends from school. He was the drummer in the band. They did not have a record deal but they did release an EP. He was also briefly part of another band called the Tee Vees. More recently he is part of a jazz quartet who have performed at venues such as the Cheltenham Jazz Festival and a restaurant at the Dorchester Hotel. They get together to rehearse whenever they can and perform live on special occasions.

2. His First TV Role Was In Prime Suspect 2

He was first introduced to British audiences when he starred in Prime Suspect 2. He played the character of Bob Oswald, a police officer that was having an affair with Jane Tennison, the main character in the show played by Helen Mirren. Their affair was a central point of the show because it had ramifications for the case that they were both working on. The show was very popular in the UK and it was also broadcast in the US on PBS. This meant that the show was also the first introduction that viewers in the United States had to Salmon.

3. He Is Known For His Baritone Voice

One of the most recognizable things about Colin Salmon is his deep voice. Coupled with the fact that he is quite tall, it makes him appear quite imposing which is something he has been able to make use of in his acting career. He makes a very good villain because his voice can be quite sinister but on the other hand it also makes him seem well-educated and charming. This means that he is able to act in a wide range of parts and the characters that he has played throughout his career have all been very different from each other.

4. Pierce Brosnan Thought He Could Be The First Black James Bond

TV.com reports that Salmon would have been Pierce Brosnan’s first choice to play a black James Bond. He played Charles Robinson in all three movies where Pierce Brosnan was James Bond. Unfortunately the fact that he has already starred in the films but in a different role probably rules him out of ever appearing as 007. The character of Robinson was M’s right hand man but his character was not killed off. Therefore there is always the chance that he will reprise the role of Robinson in the future.

5. He Has Had Several Roles Within The DC Universe

Two of Salmon’s best known roles come from within the DC universe. He had a recurring role in the first season of Arrow and was a guest star in the second. His character in Arrow, Walter Steele, continued to be mentioned in most of the remaining seasons. One of his most recent roles was as General Zod in the show Krypton. He starred in all three seasons of this show but it has recently been announced that the show is not going to be renewed.

6. He Provided The Voice For Agent Carson In The Video Game Blood & Truth

Blood & Truth is a virtual reality game that is available for the Playstation. Salmon provides the voice for Agent Carson and his likeness is also used for the characters appearance. The artwork for the game was completed by Robert Thornely who is the Principal Character Artist at the Sony London Studio. When you see the character of Carson in the game he is instantly recognizable as Salmon and this is only confirmed further when he begins to speak.

7. He Has Appeared On Strictly Come Dancing

In 2012 he starred in the BBC celebrity dancing competition Strictly Come Dancing. During his time in the show he was filming for Arrow in Canada and had to split his time between there and the UK. This meant he did not always have as much time to practice as the other contestants as his schedule was so hectic. He was partnered with Kristina Rihanoff and they made it through to the fifth week of the competition before being voted out. They came tenth in the competition overall.

Salmon is a fan of Luton Town FC as this is the town where he grew up. He once told Sky Sports that one of the reasons he loves football so much is that it stirs his emotions in the same way that the theatre does. Luton Town have faced several difficult periods during their history, but the fans have always remained very loyal and Salmon considers himself to be one of these fans.

9. He Does A Lot Of Work For Charity

He is involved in several charities for which he helps to raise funds. He is a patron of the African-Caribbean Leukemia Trust and he helps to raise awareness of this charity and the work that they do. He carries out a similar role as the patron of the Richard House Children’s Hospice. One of his most well-known charity projects is Cage 4 All of which he is chairman. This is a charity that helps young people to overcome social and economic barriers to sport by giving them an environment where they can play cricket and mix with other young people.

10. He Is Married With Four Children