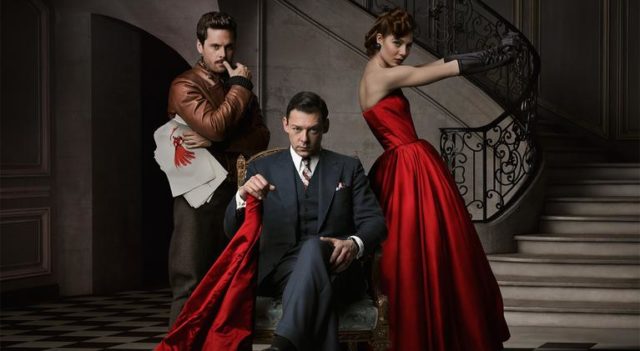 “The Collection” made its premiere appearance on October 8, 2017 as a part of the PBS Masterpiece Theater lineup. Although the first episode started a bit slow, it picked up as the streets filled with protestors carrying flaming signs. A well-dressed man observes the goings on nervously and quickly finds his way indoors to the interior of a fashion house where models are preparing in front of mirrors. He engages in discussions about matters of design, proprietors and which materials are best. Partnerships are in the works to restore Paris as the fashion center of the world.

Revelation of the main players

The setting is post-war Paris and Paul Sabine is the mystery man opening the show. His brother Claude is a brilliant designer, but he brings with him a ton of baggage. Paul is commissioned by the richest man in France to accomplish this task, but he doesn’t want to let his brother know what he’s up to. When Paul is rifling through his brother’s work, he steals two sketches of magnificent designer dresses. Paul orders his brother to complete six new sketches for a deal that he’s got brewing.

As Claude takes a bath, he makes a remark that Paul takes exception to. He promptly pushes his head under water and threatens him if he doesn’t start taking work more seriously. Claude likes to party but Paul is all business. It becomes apparent that Paul is the serious one who is often disgusted by his brother’s free and easy lifestyle. He has good reason for keeping secrets from his brother and there seems to be no love lost between the two of them.

Billy is an American photographer sent to Paris from Life Magazine to write about the latest designs. His older and more seasoned colleague is disgruntled because of the assignment that he considers to be beneath him. He has no idea that the fashion industry is about to boom in Paris. As they travel on the train, Billy is unaware that he is also traveling with an anxious young woman who will soon become the object of his intense affection.

Nena is working on a Sabine design dress when Paul walks in and strikes up a conversation with Margaret who is wearing the dress as Nena tailors it. She discloses that her third husband has just left her after a brief flirtation between she and Paul. He helps her out of her dress and it is obvious that the two of them are very comfortable with one another. He tells her that she doesn’t need any of the dresses because she already has everything that she needs.

It is then revealed that Nena had been away because she was pregnant and had to give up a baby for adoption. When the friend she is talking to asks if the baby was Paul Sabine’s her face darkens and she denies it, claiming that it was the child of an old high school friend.

As Paul is interviewed by the reporters for the magazine he shares his philosophy that “fashion has thepower to transform us.” He goes further to explain that it doesn’t matter who you are or where you come from. Billy sees Nena at work but she doesn’t give him the time of day. He is obviously stricken with her beauty. Nena pays a visit to Claude’s hospital room but leaves without saying anything. She is later caught stealing money from the shop when Billy follows her there, but he acts like he doesn’t know what she’s doing. She allows him to photograph her in some of the designer dresses that they have been working on and the photos become a sensation with Paul. Jealousy over them escalates into a fight in the street where Billy helps one of the model wearing an offensive design of the Sabine house indoors to avoid a beating.

The plot begins to thicken

During the interview, a pen that is in Paul’s possession becomes the focal point. It sports an ivory band. The older reporter asks about it and Paul said that he’s had it for years. The journalist knows that he is lying because the Germans replaced all the gold bands with Ivory just a short time back. Upon his exit, Paul searches through his coat pocket and finds a news article about Nazi war criminals being tried. He looks startled and it becomes apparent that he has something big to hide.

Next, we see Claude in a gay bar where he meets his lover and then the scene cuts over to Paul hiding the Nazi pen under papers in his desk. The camera flashes back to Claude in a violent altercation with his gay lover in a bathroom. Next, Billy asks Nena out on a date, then the story breaks about Claude being severely beaten and hospitalized. The show moves at a rapid pace and it is difficult to keep up if you’re not paying full attention to what is happening. At the hospital, we learn that Claude is the favorite son of their socialite mother. We start to get the idea that perhaps the Nena’s child was Claude’s as she enters his hospital room, then leaves in tears. Later as the mother returns, Claude disclosed that he shared dire family secrets with his ex-lover. He later begins his blackmail campaign against Claude and his family.

Paul and his wife attempt to move the mother to a lovely home in the country to get her out of the picture, but she is highly resistant. Paul asks Nena to model his clothing again and she resists because of the uproar that it caused for a common girl to be seen in the designs. Claude visits his lover Mark’s home and meets his wife. He learns that Mark is married and has a son. He doesn’t take care of his family. The episode ends with a dinner meeting between Paul and his benefactor arguing over the offensive photo of the dress. Paul defends his submitting the photograph of Nena in the dress to the papers. In the final scene, Billy is given a copy of a book that his colleague Rossi had left in his room. It contained a cryptic note that asked if he wanted the ugly truth about Paul Sabine.