Only EW and Comic-Con could pull off this coup: JJ Abrams andÂ Joss Whedon together, on one stage, to give the state of geekdom address. The dynamic duo of hip-geek culture will ping the zeitgeist and report back whatever psychic vibrations reach their over-sized pop-culture cortexes, where is media heading, what lay ahead for pop-culture, is 3d just a fad (oh, so I hope they answer that one to the affirmative). TVOvermind will be reporting live from the panel. So bookmark this patch, and keep your refresh finger limber ï¿½ at 3:30 pst the awesomeness begins.

With the annual summit meeting of wild pop culture fandom (aka Comic-Con) upon us this weekend, we at EW thought it would be kinda cool if we brought Abrams and Whedon together for an hour to talk about the past, present, and future of their creative lives. They agreed, and the whole thing is going down this afternoon at 3:30 p.m. PT, in a room that can hold a few thousand of their most admiring fans at the San Diego Convention Center. Wish you could be there? No worries: We’ll try our best to bring as much of the experience to you via posts and video over the next day or so here at EW.com.

3:38pm Waiting for the arrival of JJ and Joss, listening to Dr. Horrible.

3:40pmÂ  Jeff Jensen of Entertainment Weekly introduces JJ Abrams and Joss Whedon, as if they need an introduction.

3:45pmÂ  The guys know each other from their days at the WB (Felicity for JJ and Buffy for Joss). The most extreme thing JJ has done in the name of geekdom was sending letters to not actors or directors, but makeup people like Dick SMith from The Exorcist. In fact, he received the tongue from that movie from Smith! Joss can’t top that, except for an Alien egg.

3:55pmÂ  Joss officially annonces that he is directing The Avengers! Although, in answer to the loud cheer, “Eh…it’s just a gig.” Joss fell in love with comics becaus ehis dad used to be a writer for The Electric Company hen they were introducing Spidey Stories on the show. His dad brought home a bunch of Spiderman comics, and his love was born. JJ was also into superhero comics, but not as much as Joss. He did work at a comic book store, where he read a lot of books, but he was more into the Twilight Zone and the like.

JJ is telling how he first worked with Steven Spielberg. A few years ago, he was asked to restorm the films Spielberg made as a kid. A few years later, JJ called Spielberg with the idea of his new movie Super 8. They haven’t shot anything yet, but it has the feeling of Spielberg’s earlier Amblin films. It will NOT be in 3D.

Joss is into 3D in general and he’s glad we’re past the “poking things at the screen” stage of 3D, but there are some movies that don’t need it (for example, his new delayed movie “Cabin in the Woods”). JJ thinks the glasses take something away from the visual experience of seeing a movie. He prefers IMAX to 3D.

Joss was asked when we’re going to see Cabin in the Woods. He says that MGM’s fate is in the flux. They wanted to put the movie out in 3D because they saw a trend of 3D horror movies. JJ and Joss were asked if they thought 3D in general was a fad. JJ doesn’t know, but thinks the technology will get better and it will continue, although he doesn’t think every movie will be in 3D in the future. Joss doesn’t think it was a fad, but he also thinks that it won’t completely take over movies or other technology in general. 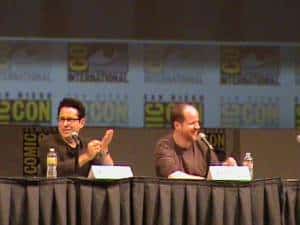 4:00pmÂ ï¿½ EW’s Jeff Jensen asked Joss what he thought about internet opportunities, as he put Dr. Horrible on the internet. He says that Dr. Horrible made money for all of the writers and actors involved, so putting media on the internet works as a model. It’s not as much money as can be made in movies and TV, but it can be done.

He said they were trying to create a sequel, but everyone was busy and the studio had antiquated ideas of broadcasting this type of media. He started working on an internet piece with Warren Ellis called Wastelanders that he was going to direct, but then got caught up with the Avengers, so that’s on hold.
What about JJ? He says they’re working on a few things right now at Bad Robot that will follow Joss’lead on broadcasting media on the internet. He says they’re working with an exhibitor on the Con floor to produce an internet series/movie.

He said they were trying to create a sequel, but everyone was busy and the studio had antiquated ideas of broadcasting this type of media. He started working on an internet piece with Warren Ellis called Wastelanders that he was going to direct, but then got caught up with the Avengers, so that’s on hold.

Is there a Dr. Horrible sequel in the works? It’s in turnaround, Joss said, but nothing is finalized. We’ll have to wait and see.

4:05pmÂ — Jeff Jensen asked Joss how he feels about working in television now that Dollhouse has been canceled. Joss said that Dollhouse was like ‘trying to fit a square peg into a round hole’. He thinks that working with the WB was great, because they let him tell the stories he wanted to tell. But that doesn’t exist anymore. He likes genre stuff, which is what FOX wanted, but he thinks that he has more of a cable mentality than he realized. He’s extremely happy to be working with the crew at Marvel, because they’re the studio and the producers.

4:10pmÂ  JJ says that his new show for NBC, ‘Undercovers’, will be more self-contained thank serialized and he is more drawn to those types of stories. Joss says his experience is that the networks don’t want serialized shows because of the bottom line, but that the audience members remember serialized shows more than episodic shows.

4:15pmÂ  Who’s inspiring Joss and JJ right now? JJ says he loves Edgar Wright and that the new movie Scott Pilgrim vs. the World is awesome and he loved it. Joss has had moments of panic because he loves JJ’s version of Star Trek so much. He says that it’s the gold standard for a movie.

An audience member asked whether JJ and Joss preferred film or television. Joss thinks one isn’t necessarily better than the other. What you can accomplish in a movie is fulfilling and it’s done when it’s done. But telling a story over a number of years on television is a good thing too.

4:20pmÂ  Joss’s dialogue was praised by EW’s Jeff Jensen. He says that he’s not in the habit of writing second drafts and generally writes the dialogue even before coming up with a plot.

An audience member asked whether the ending of Lost is what JJ wanted. JJ says that Damon and Carlton really ran the show. He says the show was in flux throughout the seasons, because there are things you can’t anticipate. For example, they didn’t realize how amazing Michael Emerson would be as Ben Linus and they had to re-imagine the season because of that. He also thinks that Damon and Carlton wrote a very emotional and terrific series finale episode.

4:25pmÂ  An audience members says that Joss is going to take on an established storyline like the Avengers, but he has such an individual tone in Hollywood and wants to know how he’s planning on reconciling that. He says that he’s going to be very respectful of the Avengers’established tone, but still put his own mark on this, as well as blend the tone from all of the various Marvel movies.

4:30pmÂ  An audience member asked whether JJ and Joss thought film school was worth it. JJ thinks that there’s less of a need for it now with the technology we have and the ability for anyone to make a movie. JJ admits that he didn’t go to film school, but his father gave him a piece of advice about going to college: ‘Go learn what to make movies about, not how to make movies.’Joss says that his experience in film school was great and he had good teachers.