Our intrepid gal on the Comic Con 2009 floor, Jopinionated, has checked in with an update on the Flash Forward booth setup by ABC. Similar to last year’s Dharma recruitment effort, curious visitors are being invited in by mock staff to record their ‘Flash Forward‘for a project called ‘Join The Mosaic.’Outside the booth, a sign reads:

What Did You See?

This fall the entire world blacks out for 2:17 seconds. During that time we each see a vision of the future – a Flash Forward of where we will be on April 29, 2010.

The Moscaic Collective is an online database that aims to put together a picture of the future, of Flash Forward at a time.

Share your Flash Forward here at Comic-Con in one of our mobile recording booths or online at www.JoinTheMosaic.com starting August 16th.

It only takes a few minutes so please share yours now. No matter how big or small, every Flash Forward helps us put the picture together.

The site itself gives you a serious looking blank page. Seriously. It’s blank. Unlike last year’s LOST game, this Flash Forward experience will likely finish. The Dharma game was pulled due to budget reasons (although, many fans were disappointed with it as well). The Flash Forward game is kicking off at the height of the Flash Forward buzz, so chances are there will be tons of participation.

I talked to Jopinionated just moments after her appointment in the booth. She described the overall experience as being very much like the Dharma Wants You booth from last year. “I went up to the booth first thing because of how crazy the LOST booth got last year. It is literally the same booth, even the same girl who was wearing a Dharma suit last year – so she obviously works for ABC Public Relations. They take you into the booth with this little video camera, tell you to press record, and you can say what you want for three minutes. So I came up with this story about how I was on a bench on a beach and these guys in a white suburban took me to this warehouse and put me in a chair with a spot-light. Then these people with no faces started asking me questions about my life, and my childhood. Then they took me to my childhood home, and just as the three minutes was expiring I said ‘I opened the door, and guess who was there.'”

Nice cliff hanger Jo! Apparently they thought so as well, they stopped Jo on her way out and told her that her recording would be on the website in August and gave her a business card with a phone number on it. Whoa. Watch this space for updates on the FlashForward business card. 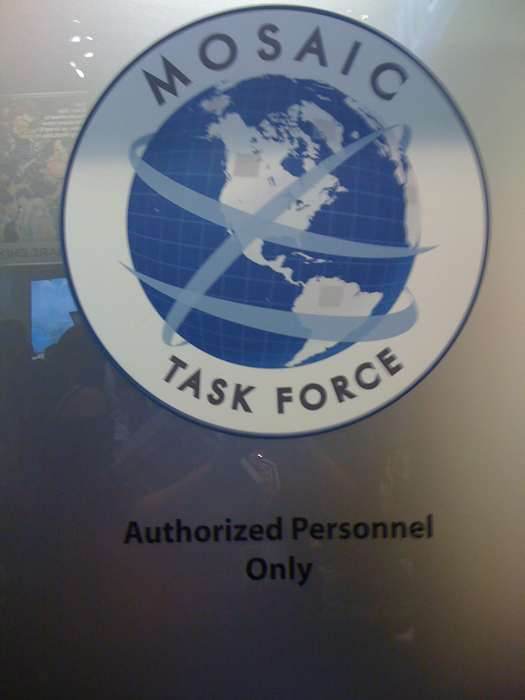 Logo For The Mosaic Task Force 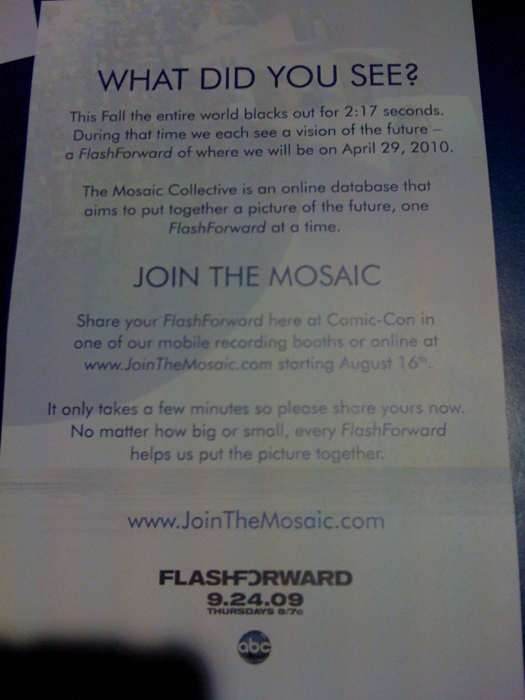