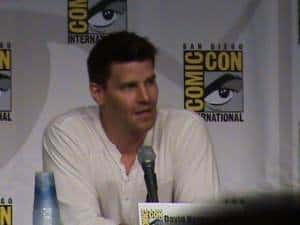 Of all the panels held on Friday, I was the most psyched about Bones (and True Blood, but still Bones). Creator Hart Hanson and star David Boreanaz were on hand to talk about the upcoming sixth season of the FOX show. They revealed a few spoilers during the panel, so we’ve clearly marked those in the post below.

The moderator from TV Guide started the panel by revealing *SPOILER ALERT* that one of the cast members would die. Eek! Hart refused to provide any further details about it, but said it would be “exciting”. *SPOILER DONE*

Firstly, David Boreanaz? HOT. He regaled the audience with his first appearance at Comic Con in 1997 for Buffy: The Vampire Slayer. When asked about the recent vampire craze, he said it would be great to see an Angel movie, which the audience totally agreed with. Hart interjected that David’s vampire (Angel) is completely capable of beating up all the other vampires. I’m in total agreement.

And then, a surprise! Star Emily Deschanel walked onto the stage. The moderator informed us that Emily had just finished filming a movie called Perfect Family with Kathleen Turner, which she filmed over the hiatus (with some “girl-on-girl” action, for the boys reading this). 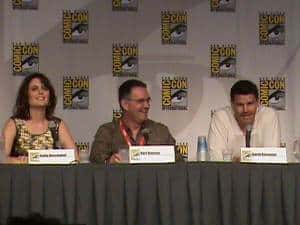 When asked about the end of season 5, David said he thought it was great season ending and was very emotional in terms of the relationship between Booth and Brennan. He’s excited for us to see how the two characters reconnect. The moderator brought up a rumor that Booth won’t be coming home from Afghanistan alone, and Hart said he has heard about that rumor. David assured us that Booth would always be with Bones, even if he sees some other women along the way. Emily thinks that Brennan has a lot of feelings for Booth, missed him while she was away in Maluku and maybe regrets her decision to not be with him in the season finale.

Hart revealed a few spoilers about the season 6 premiere and some returning guest stars for next season. *SPOILER ALERT* Heather Taffet will return as the Gravedigger in the sixth season. Hart considers the Gravedigger to be the evil version of Brennan, and wonders what the evil version of Booth would be like, maybe hinting that we might see that character next year. As the season opens, Angela and Hodgins are living a great life together in Paris. In the first conversation between Brennan and Angela, one of the characters “blurted out a very interesting fact” and this becomes an important thing in the season opener. Hart also revealed that Angela and Hodgins would face some trails as a couple, but would definitely stay together. *SPOILER DONE*

Emily said that she really enjoys her character, because she’s representative of a strong, intelligent woman (even if she’s flawed). She also really enjoys the writing and dialogue of the show, all of which attracted her to the show in the first place. Hart said that he would be very interested in doing a 3D episode of Bones, but the audience wasn’t crazy about the idea.

Towards the end of the panel author Kathy Reichs (who’s books inspired the show) was called out by Hart and was called up to the stage. She says that she has two books coming out and one of them was given out to the audience members in Comic Con. She also revealed that she’s releasing a new young adult book series, which will be called “Virals” and released in November