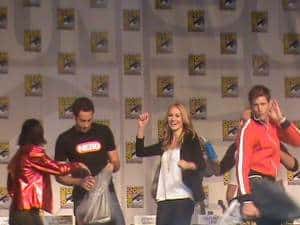 The first panel on the Saturday edition of Comic-Con was the one I was waiting for: Chuck. After a highlight reel announcing that Linda Hamilton will play Chuck’s mother(!) and a video of Jeffster! dancing to Lady GaGa’s “Bad Romance,” Jeffster themselves brought out the cast: Mark Christopher Lawrence, Scott Krinsky, Vik Sahay, Ryan McPartlin, Sarah Lancaster, Adam Baldwin, Yvonne Strahovski, Joshua Gomez, and Zachary Levi. The cast was joined by series creators Josh Schwartz and Chris Fedak. Moderators Alan Sepinwall and Dan Feinberg of HitFix.com got the panel started.

For the cast, there was a lot of drama surrounding the show last season. How was the feeling around the set this year? Were there any doubts they would come back? Baldwin said that there were a lot of people rooting for them at the network and studio, but it was the fans that put them over the top. How is it going to work now that Chuck has quit the CIA? The search for Mom is going to be a big driver of the season. Schwartz said that Chuck and Morgan are going to be a good “bad but good” spy team.

How did they get Linda Hamilton? They listened to the fans, and thought about who Chuck and Morgan would want to be Chuck’s mom, and they wanted Hamilton. There are some other great guest stars: Nicole Ritchie, Olivia Munn, Isaiah Mustafa (the Old Spice Guy).

The CIA is taking over the Buy More, and a revolving cavalcade of guest stars will be the head CIA person in the store, Greta, starting with Munn and then Mustafa. How has the working relationship between Strahovski and Levi changed now that Sarah and Chuck are together? Levi doesn’t think it has changed too much, to be honest. Sepinwall asked how it was for Strahivski that she got to smile as Sarah a lot in Season Three. She was greatly appreciative to be in the funny scenes.

Anything the creators regret about the Shaw arc? Schwartz said that Shaw was a great enemy, but that they learned some things about keeping Chuck and Sarah apart. They insist that Chuck and Sarah will remain a couple this season. What about the newest relationship: Morgan and Casey. Gomez likes Baldwin’s soft hands, and Baldwin finds it interesting that the camera people can get the two of them in the same shot.

What was it like to play the softer side of Casey? It was surprising because his daughter was able to kick his ass, and he’s looking forward to working with the actress who plays his daughter, Alex, this upcoming season. Was it a relief to Lancaster that Ellie found out about Chuck’s secret? She was just happy to hit Casey with a frying pan, but she does look forward to Chuck keeping a secret from Ellie again. Did the Buy More guys fear unemployment when the store blew up? In a word, “Yes!”. Schwartz said the guys are a huge part of the show and will be back.

Unfortunately, the panel started late, so there was no time for questions from the audience. However, the gathered fans had a great time, and learned some major news about the show, namely the identity of Chuck’s mom, Linda Hamilton. Further, it sounds like Fedak, Schwartz and crew have some great stories planned for Season Four. If the enthusiasm of the crowd was any indicator, maybe, just maybe a fifth season will be in the cards?

What do you think about the casting of Chuck’s mom? What are you looking forward to in Season Four? Please leave your comments below or in the discussion boards.