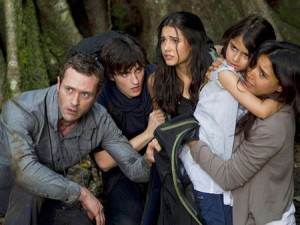 Well, I have to say I am very excited about Terra Nova. During the panel that took place this morning, the audience got a fantastic treat as we had a chance to watch the first part of the two-hour pilot scheduled to premiere on September 26th on FOX.

And let me tell you something.

The show, produced by Steven Spielberg, tells the story of the Shannon family. They live in a rather depressing future in the year of 2149, where the air is so bad you can’t breathe and there is no fresh food available. Overpopulation became a huge problem and each family can only have four members at most. What happens to the Shannon family is that they have a third child and that is against the law. When they are caught, Jim Shannon (played by Jason O’Mara), the father, is sent to prison.

Two years later, Dr. Elizabeth Shannon is recruited to go to Terra Nova, but she would have to leave Jim and their youngest child behind. Since going there is a one-way trip — they are travelling in time after all — she comes up with a plan to break her husband out of jail and smuggle him and their child to Terra Nova, where they can have a second chance at being a family.

After a lot of struggle, they travel back in time and finally make it to this new world. Terra Nova is a settlement where they all have houses, fresh food, sunlight and dinosaurs. What is interesting about the time travel, however, is that this is a completely different time stream, so whatever happens in Terra Nova will not affect the current timeline.

Once there, they find out that not everything is sunshine and daisies, as there is an enemy group called The Sixers. And there is always the threat of dinosaurs, obviously.

The first part of the pilot is very well written and, most importantly, it is engaging and very exciting. I have to say I am completely hooked on this show and can’t wait to find out what happens next. 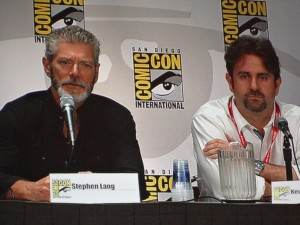 Famous for his recent role in the incredibly successful feature film Avatar, Stephen Lang says that acting with the CGI dinosaurs is not so different from the work he did in the movie and it requires focus and imagination.

The show — filmed in Queensland, Australia — will be an adventure/thriller, but executive producer Brannon Braga says it will also be about second chances and exploring humanity and hope. Jose Molina also said that the dinosaurs will not be ignored (like the polar bears in LOST) and we will see quite a lot of them. We will also get to see more of the future, but the first batch of episodes will focus on the Shannon family’s life in Terra Nova.

All in all, it looks like we have got a great show in the making, guys.

This one is going to be pretty good, I can feel it.