Though most people judge comedies on their ability to execute and deliver jokes, it’s sometimes nice to give a series credit for at least trying new things, even when the failures come. I find myself putting Community in that second category, maybe because I just adore the series and need any excuse I can to rationalize love for episodes that others don’t enjoy, but I think more so because the series deserves it. 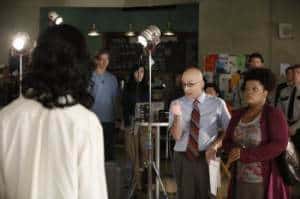 It’s easy to think of Community as simply throwing out pop culture references to the Pavlovian audience at home, but there’s often more going on. Usually that just involves riffing on the sitcom form, but here – and really all season, minus last week’s episode – the series has been interested in doing something more.

Thus, while ‘Messianic Myths and Ancient Peoples’is most definitely the least overtly funny episode of the series’short run and sometimes gets a little lost its attempt to criticize indulgent meta explorations, it’s still a really compelling episode, if only for its attempts to do those things and still portray its characters in the most realistic way possible.

Spurred on by Shirley’s desire to create a viral video based on religion because no one attends her church anymore, Abed reads the bible, and like he always does, gets consumed by the culture that he’s consuming. He decides to make a film about God that’s about making a film about God that’s about a film, etc. you get it. From there, Abed becomes this mythical figure whose message spreads across the campus because he can say blank things like ‘We are the movie and the movie is us’or whatever and people are going to read whatever they want into it.

‘Messianic Myths’is thus taking two difficult storytelling focuses in meta commentary and religion and trying to meld them together in a way that’s more emotionally satisfying than funny – or that’s at least the way I understand it. There are few funny moments in the A story throughout the episode aside from a few reaction shots and Britta’s dancing in Shirley’s attempts at making a viral video, and for sometimes, Abed’s esoteric reactions to Shirley’s criticisms are, well, too esoteric, even for him.

But there’s obviously something here that’s both critical and accepting of religion in a way we don’t regularly see on television. Shirley’s probably the most one-dimensional of Community‘˜s study group, but that’s only because she’s been given the least amount to do thus far. However, this episode does a glorious job of exploring how important her faith is to her without making it some sort of right/wrong argument. Other write-ups have discussed this, but too often television wants to make religious people seem like nuts instead of good-hearted individuals with a specific belief. Here, Shirley thankfully gets to be the latter and ultimately, helps Abed realize that his indulgences have repercussions and they share one of the best emotional beats the series has ever done by time the craziness is all over.

Like I noted above, it’s not all successful. The biggest issue I had with the whole set up is how easily people bought in to Abed and his message, even for a series that’s done episodes like ‘Modern Warfare’their dedication seemed to lack realism or any anchor. Perhaps that’s part of the commentary on religion, and if it is, bravo.

But the thing is, I’m not sure any other comedy would have even attempted something like this, and particularly wouldn’t have attempted it in the way Community did. The series seems to be really going for broke this season, even if means being more serious and complex than laugh-out-loud funny and though that probably won’t lead to a third season, it makes for more compelling episodes in the meantime.