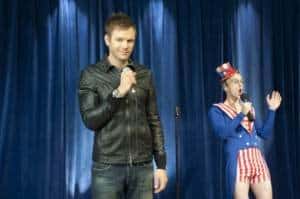 After last week’s high-concept, high-profile and flat-out fantastic episode of television, it makes sense thatCommunity came back with an episode more in-tune with its basic framework. Well as ‘basic’as the series can get at this point. There appears to be rumblings of a minor backlash towards the series after the last handful of episodes, whether it’s in reference to the handling of Pierce (most of the rage) or how the series’ability to tell wildly different stories on a structural level each week (some of the rage) and I have to imagine ‘Intro to Political Science’calms some of those concerns. Moreover, I can’t really imagine why anyone who really enjoys this series would find this episode disappointing outside of Pierce’s presence (which I’ll get to).* This feels like a classic season one episode in vibe and story, with an additional layer of season two’s structural escapades lathered on top.

*Of course I’ll be the first person to admit that I basically love every single episode of Community and thus am probably fully in the tank for anything it does. I’m less enraged by the handling of Pierce and certainly even less enraged by the fun the writers appear to be having with structure and framework.

In concept, this is a really simple and enjoyable episode. Joe Biden is making a random tour of community colleges and hopes to meet with Dean Pelton and Greendale’s Student Body President. The only problem is there is no student government at Greendale, so Dean Pelton decides to have an emergency debate and election for the position. Or it might all just be an excuse to put on his sister’s Uncle Sam outfit. It’s probably both, and I’m fine with that. In any event, obviously Annie wants to win the election because she’s young, determined and you know, president material. When Jeff mocks her dedicated interest in something so stupid and she gives him the guilt trip, he ultimately decides to face off with her – along with MAGNITUDE (Pop-Pop!), Leonard, Starburns, Garret, Pierce and a girl’s name I can’t remember but that’s certainly the point – to prove a point. Before long, both of them realize and embody the stupidity of politics, from Jeff’s faux-patriotism and ability to switch words around to Anna’s ability to narrow her campaign promises down to one simple phrase.

Listen, I’ll just say it: I kind of adore Jeff and Annie together. That’s probably just residual Alison Brie love, but it’s hard to deny the chemistry between the actors and the characters. The writers know this and so throwing the two of them together in some sort of competition is just too easy. There’s been some discussion about this episode’s similarity to ‘Debate 109’³ and with good reason, but while that episode set the table for the great relationship between Jeff and Annie, this one showed how the two of them have grown much closer since that fateful debate competition. They still bicker and subsequently want to make the other a better person, but there’s more respect there now I think. Jeff wants to show Annie the stupidity of politics because that’s just who Jeff is, it’s nothing remotely personal towards Annie or her dreams. I’m not early S1 Jeff would have had similar feelings towards the whole thing. The plot doesn’t move their relationship forward as much as it reminds us of how awesome said relationship is, and I’m fine with that. I really don’t think Community is ever going to pull the trigger so far and have the two of them date one another exclusively, so it’s not as if I’m looking for rapid development on that front.

Abed’s really the only other character who gets a lot to do here, and his story is just as adorable as Jeff and Annie’s little battle. Because of Biden’s impending presence, the government has sent Secret Service agents to scope out Greendale’s layout, quality of character, number of fire exits, that kind of thing and Abed’s the only one who has noticed them. Once one of the female agents (played by the guesting Eliza Coupe), the two of them begin a little charming flirtation. The two of them bond over their inherent detached outlooks, which just makes me smile. After the miserable experience Abed had to endure when the group went out for drinks in ‘Mixology Certification,’it’s nice to see the series present him with some hope, even if it does come in the form of a woman who refuses to verbally acknowledge her attraction to him. I think I’d watch an entire series built around this romantic pairing, as she watched him from a surveillance van in the parking lot as he watched a movie. What a date. Again, this is a small, but effective reinforcement of the character’s qualities.

However, for those of us who do enjoy the structural fun that Community provides on a weekly basis, there’s some good stuff going on in ‘Political Science.’The aforementioned satirizing of the political campaign was fantastically played, as was Troy and Abed being able to act out their hosting dreams as the debate talking head commentators. The debate framework probably could have allowed the episode to push the commentary even further, but sometimes it’s fine to rely on the simple pleasures of Troy and Abed using a voter map with a 98 percent standard of error, Annie’s discovery of Jeff’s Real World: Seattle audition tape and the debate coming to a close with Leonard and MAGNITUDE facing off with dueling catchphrases. You could probably read a whole bunch of political statements into this episode, but it’s not really necessary. Sometimes, the simple pleasures of Community‘˜s inherent charms are enough for me.