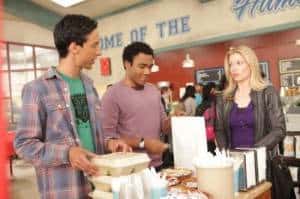 I have been criticized, both online and in-person, for being totally in the tank for Community. Readers, friends, family, whomever they all just assume I adore every single episode of Community and perhaps I have lost all of my ability to review the series ‘objectively.’Of course, I hate to break it to everyone, but objectivity is a lie. Obviously, I’m going to praise episodes of Community that I like and really praise ones that I adore. If you don’t like them, that’s absolutely fine with me and I think I’ve been pretty open with the fact that this is a series that hits all of my comedy sweet-spots. Clearly I want you to keep reading the site as much as possible, but if you think my Community reviews are garbage and bias, that’s your right. Just like it’s my right to FREAKING LOVE EVERYTHING.

Anyway, I say all that to preface my fairly delayed review of ‘Custody Law and Eastern European Diplomacy,’an episode that I found fairly entertaining but not particularly fantastic or anything. This is probably my second least favorite episode of the season – ‘Celebrity Pharmacology’takes those honors – but that’s still like picking between all my theoretical children or something. I’ve seen various comments on Twitter about the scale of just how disappointing this episode was and I think at this point, some folks are expecting too much. There have been some all-time classics in season two of Community and whenever the series takes its foot off the gas just a bit like it has in a number of the recent episodes AND THEN critics and wannabe critics like me still like the episode, there’s an assumption we’re being too easy. I’m not trying to call anyone out, but maybe folks are actually being too harsh and having too high expectations that every episode of the series is going to be at the ‘Modern Warfare’or even ‘Mixology’levels. It’s just not, those are the realities of American broadcast television in the 21st century and I’m fine with that. I can see why some people might not have enjoyed ‘Custody Law,’especially the Jeff-Shirley-Chang plot, but I enjoyed the 21 minutes I spent with the series this week and even if I think this is a low-B kind of episode, that’s not the worst thing in the entire world.

Now that I’ve officially criticized the criticisms of both the fandom and the reviewers, let’s actually talk about the episode. Like I said in the last paragraph, I think it is really obvious where the strength of this episode was and that’s with the Britta-Troy-Abed story. She’s not the most popular character in online circles, but I kind of adore Britta and I think she’s been sidelined a bit this year because she doesn’t fit as easily into so many of the series’plots. I think it was Todd Van Der Werff who noted that Britta’s desire to NOT be part of stuff hurts her when the series wants to do paintball or something, whereas Annie’s desire to DO ANYTHING makes her a more obviously likable and appealing lead or supporting player in the various hijinks. But I appreciate that instead of sacrificing the character’s best qualities, the writers have just decided to not use Britta as much this year and save her for really fun plots like the lesbian friend stuff from the Valentine’s Day episode or what we see here with her courting of Troy and Abed’s new friend Luka (played by the gloriously awesome Enver Gjokaj).

The story did a nice job emphasizing Britta’s most annoying qualities – her ability to ruin things, which in this case was Troy and Abed’s male friends – without making her seem like a terrible person. Britta has become more likable as the series has shown her less likable qualities, whereas early in season one when the writers were trying to push Jeff and Britta down our throats, she was infinitely less likable. I know all that took was having all the other characters point out how much Britta sucks and subsequently loving her for that, but it’s been such an effective and entertaining strategy. I would much rather watch a Britta plot like this one, where her desire to do the right thing completely bites her in the ass, instead of having her butt into the lives of the others. I think this is especially well-executed when Britta interacts with characters other than Jeff because there’s of a sense that she’s trying to ‘make him a better man’or whatever phrasing you want to use to describe the series”primary narrative.’With Jeff, it feels like somewhat forced character development (this has occurred a lot less in season two, though), but with Troy and Abed, it just feels like goofy ol’Britta and her meddling. I hope this makes sense.

The Jeff-Shirley-Chang plot was less successful, and I’m not completely sure why. I think there’s been a weird handling of Shirley’s pregnancy in that we haven’t spent enough time on it for it to really feel like it’s a real thing that is happening so any random plotting by Chang to become a better father feels a bit forced. Early in the season it seemed like this season was going to be Shirley-heavy and then the pregnancy stuff skirted away so that Pierce could become an awful individual and even if I really, really like Yvette Nicole Brown’s work this season and have enjoyed Malcolm-Jamal Warner in his few guest appearances, it seems like maybe we missed an episode or beat with the whole story. I’m not exactly certain what that beat would be and am sure the end of the season is going to focus a lot on Shirley’s pregnancy, but it feels like the series’writers are a bit worried about putting her completely at the front of the narrative so they wrote this moderately entertaining narrative with her and Jeff. Again, I like the two of those characters together and freaking adore Shirley’s ability to guilt Jeff into anything, but I think the story should have been more about Shirley than the shared weight between she and Jeff.

And Chang is Chang. I’m not sure what’s going on there, but much like Shirley, it appears as though the writers’early-season intentions have been tinkered with for whatever reason – Jeong’s been off doing The Hangover Part II, for one – and now the character still works, but this isn’t perhaps the best version of him. Like I said, I’m not sure if an entire episode or primary story would work if it were just built around Shirley and Chang without the middle-man, but I think we might need an episode like that in the future to flesh out who these people are going to be when this baby comes and how it’s going to change their life. I mean theoretically, won’t Shirley have to take a semester off to tend to her baby? Is Chang really moving out of Jeff’s apartment? There’s still a lot of questions up in the air and again, that’s totally fine, but those things were nagging at me while I watched this episode.

Despite all that, this feels like a grower. There were a lot of great individually hilarious moments – most notably Britta’s version of what she assumes a Britney Spears song is, Chang spinning around in a circle and Shirley’s ‘You’re not going to make a pregnant woman…’bit – and this was just generally entertaining. It felt like a middle season one episode and that’s totally fine with me. Despite my issues with ‘Custody Law and Eastern European Diplomacy’I feel like it will be looked back upon as stronger once we see how the Chang and Shirley story plays out as the season comes to a close.