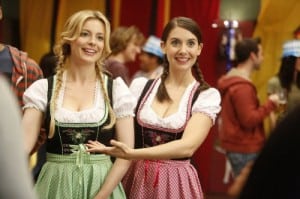 Can you believe that this is the third episode in a row that saw members of the study group dressed in costumes? It seems to me that the writers are running out of ideas and leaning on the time-honouredÂ gag of playing dress up. Sadly, it didn’t work.

I could’ve sworn I saw somewhere on the Internet that there would be an upcoming episode ofÂ Community where Abed would be in full John McClane mode and seeing this episode was about the stud group’s bout with three Germans at Greendale andÂ Die Hard is essentially all about preventing Germans from ruining Christmas, it made sense right? Wrong.

Maybe I’m guessing they’re saving theÂ Die Hard themeÂ (if there is one) for the Christmas episode that will probably air sometime around Easter.

The episode revolved around three German students who successfully took away the study room from the study group, leading Jeff and the gang to realize that for four years they’ve been hogging the study room for themselves and that they were the Germans in this situation.

I think I’ve come to a place that I know for sure that Community won’t be like it used to be and it actually was silly of me to think so. There was nothing really particularly funny about the episode except for the Die Hard shout out.

However, two things did return during the episode: Chang finally made his way back to Greendale and the return of the “Daybreak” gag at the end of the episode.