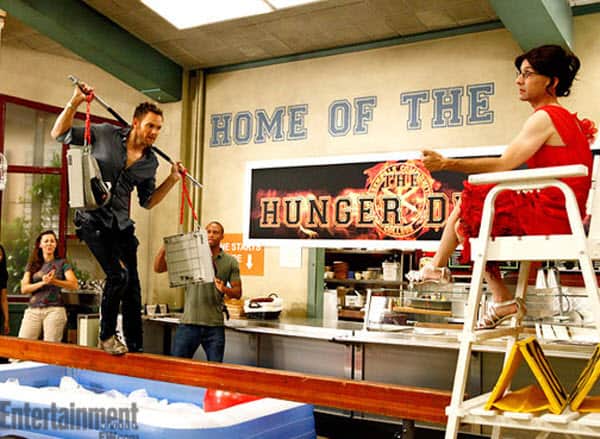 Just because Dan Harmon departed, that doesn’t mean Community‘s going to get all boring now. Rather, continuing the show’s long-standing parody tradition, the latest piece of pop culture to be tackled is The Hunger Games. Sure it might be six months late as the movie premiered quite a while ago, but I don’t really care judging by how hilarious this description sounds.

“When the Greendale student records seem to be lost, the Dean (Jim Rash) stages a Hunger Games-like competition to determine enrollment in a class called The History of Ice Cream. (Which raises the question: There’s actually a class at Greendale called The History of Ice Cream? “Ice cream is something that people eat every day and they probably don’t know its origin story,” deadpans McHale. “F– you and your elitist I-don’t-need-to-know-about-my-frozen-treats-and-where-they-came-from attitude.”)

Jeff not only competes in the games, he even performs an elaborate tango with Dean Pelton, who dons multiple dresses in the episode. “He will repulse and arouse you all at once,” notes McHale. “Mostly repulse.” McHale also offers this tease about another part of the premiere: “It is an homage to something that kids in the late ’80s and early ’90s watched on Saturday mornings.”

The Dean dons multiple dresses? Count me in. The first picture from the episode is via EW above, and the second one below? I can’t even describe it with words.

Winger. Pelton. Unicorn Men. That is all.

Check Out These First Look Photos for The Minions Holiday Special