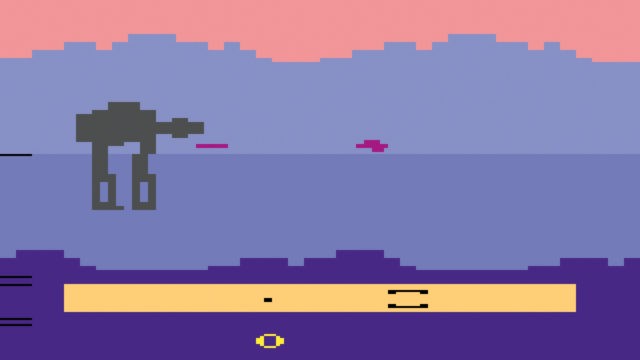 The complete time line of Star Wars video games is hard to watch without growing just a bit dizzy since when you really look at it there are a LOT of games to consider. Some of them you might never have heard of, and for good reason, but a lot of them are those that fans can likely recognize. A few of them might have been well before a lot of people’s time but I can very well remember the Hoth battle that was featured in the game above and the games that feature the outline of the Death Star and the trench run and everything else. I grew up with these games on the Atari and in the arcade. Does anyone remember the Atari at all? As of now it’s more of a brand name than its own entity as it used to be, but back in the day the Atari was the system to have.

In the arcade the Star Wars games were awesome and before you learned the tricks they were incredibly difficult. Performing the trench run without dying multiple times was something that only the experts seemed capable of. If you could do a trench run with only one quarter you were a god among gamers. Plus, once Lucas Arts really started coming out with new and improved Star Wars games the excitement only got better. Those games that allowed you to experience the different movies were awesome, and my personal favorite used to be the game in which the player was on the the speeder bike rushing through forests of Endor trying their best not to smash into trees or downed logs. Doing the same type of run inside the Death Star with the Millennium Falcon was just as fun and highly satisfying once you reached the end and the game was won.

Eventually the games evolved and The Empire Strikes Back brought forth the more adventurous, quest-style games that had a definitive beginning and ending. From there it only got better and more involved as Star Wars began to explore many different venues and became even bigger and better throughout the 80’s, as CD-ROM became the desired format and PC games became all the rage. Then came the 90’s, when the eventual rise of The Phantom Menace started to change the landscape again and podracing became one of the all-time favorite games of fans since it was fast, the graphics were awesome, and the action was intense.

Once the 2000’s came around the graphics just got better and the stories got even more insane however as Star Wars started to change and evolve within the gaming world. More adventures were laid down, more aspects of the Star Wars universe were discovered and developed, and Knights of the Old Republic swiftly began to take over as the top Star Wars game on the market. Having played the first and second games of the series I can fully attest that it was worth every penny of development. But then again things had to change when Star Wars games started going to mobile versions that were cheaper to make and easier to market.

As of now Star Wars is still a huge contender in the video game market, and with movies coming out every year to inspire even more games it’s likely that they won’t be fading any time soon.