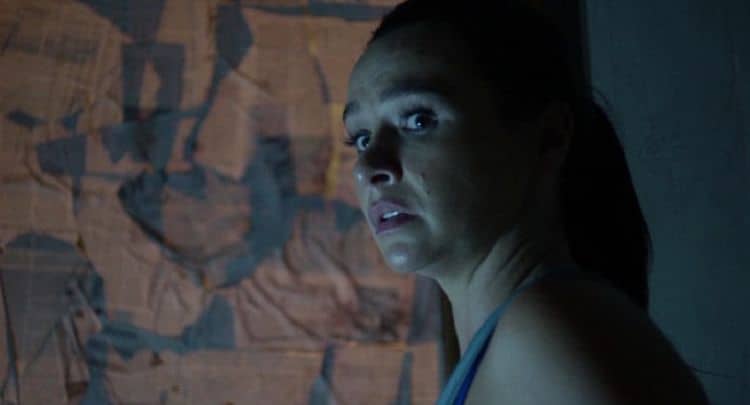 What do you get when you mix an abandoned summer camp with creepy ghost kids, Andy Palmer’s latest supernatural horror film, Camp Cold Brook. To be more specific the synopsis reads: Reality TV producer andÂ host Jack Wilson (Chad Michael Murray,Â House Of Wax,Â Riverdale) finds himself in a tough spot when his showÂ Haunt SquadÂ is about to be canceled. In a last-ditch effort to spark ratings, he and his producer Angela (Danielle Harris,Â Halloween,Â Halloween II) choose to film their next episode at the legendaryÂ CampÂ ColdÂ Brook, which was host to a horrific incident when the young campers were drowned in a nearby creek 20 years ago. Their arrival begins like any other episode … but when this remote, backwoods camp begins to reveal its secrets, the TV crew find that they’ve gotten more than they bargained for.Â Â Cue the menacing music!

Speaking of the score, composer Chad Rehmann is the man to thank for Camp Cold Brook‘s sinister music. Music that wasn’t completely created from instruments, but also from window screeches, twigs, water, and kids screaming. After hearing all this, we spoke with Rehmann and learned more about the process for creating the Camp Cold Brook score.

In a few words how would you describe your score for Camp Cold Brook? A mash up of a traditional orchestral score with avant-garde elements that were created using objects one would find at a summer camp.

We read that you incorporated your own kids screaming into the score. Can you elaborate on this? Once a person enters Camp Cold Brook they are constantly being watched by children. I somehow wanted to include the voices of children in the score without being overt about it and came upon the idea of blending my kids’ screams into all the crescendos that happen in the film. While in most cases I don’t think an audience member will say, “Hey, I heard some kids screaming in that score”, I do hope that blending that element into the scene elicits a more visceral reaction from the audience. Something they can feel in their gut, but not sure why. And, my kids had a blast doing it!

You used a lot of objects one would find at a camp in this score. What would you say was the oddest thing you used to produce sounds for this score? My friend Perice Pope, a trumpet player in LA, came to my studio one day and we experimented with this idea of bugle calls that a camper might hear in the morning. Many of the drones heard in the film are actually some of the bugle calls that were slowed way down. In addition, we got some great recordings of him humming and buzzing through the mouthpiece creating some really eerie effects that I was able to use.

Did you create reoccurring themes for the main characters in the film? If so, did you have a favorite to score for? One of the terrifying aspects of the film is that the characters, and by proxy the audience when POV shots are utilized, are always surrounded by children watching them from afar. Instead of creating a specific tonal theme for the children, I used some very simple slides on a single cello string that constantly pan left and right, making the audience feel as though something is actually moving back and forth just off screen…even though they can’t see it.

It sounds like there was a very thin line between sound design and score. Did you work with the sound designer at all on this film? If so, is that customary to do so? The sound design team and I were working in tandem during the post process, and yes there were probably more conversations taking place as opposed to other films on which I’ve worked. I especially try to be keen on not intruding on any sonic space that is already being used. If, for instance, the director wants a musical hit when someone falls on screen, I try my best to surround the sonic space around the thud that’s already there. In other words, if the fall creates a deep boom, there is no sense in me duplicating that in the score since the boom is already there — so, I may instead using instruments or effects that are higher in the spectrum.

In the horror genre, the project’s score can determine the whole vibe of the film. Did you feel this weight when working on this project? Do you look at your score as almost another character? There is always pressure to deliver; however, what made this process easier is that Andy Palmer (dir) and I had many conversations about the score and a clear objective as to what we wanted the score to do before I delved into the film. Mainly, creating two different sonic worlds. For all of the scenes that take place outside of the camp, a more traditional orchestral score was written and recorded. For all of the scenes that take place inside the camp, a more avant-garde score was created using a palette of sounds made from summer camp objects, as well as using traditional instruments in non-traditional ways. More so than other films, instead of feeling as though my score was a character it almost felt as though my score was a place. It was helping to define where the audience was at any particular point and in what timeline (given the use of flashbacks in the film). Because of different timelines and unique sonic worlds created for each location, the walls of my studio were covered in diagrams and flowcharts to make sure that I had it all straight myself!

You are releasing your score on February 7. Do you have a favorite track on the album? Camp Fire Confession is by far my favorite — and the reason is twofold. First, it’s one of the moments in the film where all of the horror subsides and a simple conversation between two people takes place — it’s a great break in the film, and it gave the score a chance to settle down before ramping back up again. Also, there are some pulses that my team and I created using some of the trumpet effects that slowly morph into a pseudo walkie talkie static, which is another element in the film. It is such a deceptively simple sound, but one that I probably spent far too much time obsessing over and developing.

Did you learn anything you hadn’t already known from working on Camp Cold Brook? This was the first film where I heavily relied on instruments that I created myself, as opposed to using traditional instruments for everything. For those interested in software, Izotope has this really cool program called Iris that allowed me to filter out frequencies within a recorded sound and resynthesize it into a completely different sound. I’d say close to 75% of my work creating and utilizing these sounds was done using this technique — a technique that I learned how to do specifically for this film.

In a previous interview you discussed always trying to push boundaries. What boundaries did you find yourself pushing with Camp Cold Brook? How far can I get making a score using window screeches, twigs, water, and kids screaming? Can I scare an audience by dropping a hammer in a bucket of water or having a trumpeter blow through a mouthpiece? While these questions started out almost as jokes in my head, as the process unfolded it was fun to see how far I could take it given the parameters that I set for myself!

Are you personally a horror fan? If so, what are some of your favorites? Andy Palmer (dir) has admitted many times about how big of a chicken he is when he watches horror films! And while I wouldn’t go that far, I think being married to someone who is not a horror film fan and having three small children has changed my tastes a little. At this point in my life, a majority of my screen time is spent watching animated films. The irony that I’ve found success in something that no one in my family will watch, doesn’t escape me! I think the last horror film I saw in a theatre was Jordan Peele’s Get Out that he made with Blumhouse (again, three small children = not a lot of free time), and I was a huge fan of what Michael Abels did with that score. I love the work that Blumhouse Productions does, especially because of the creative control that they give to their directors, and I am eager to collaborate with them one day!

Chad Rehmann’s score for the film is getting released on February 7, 2020.