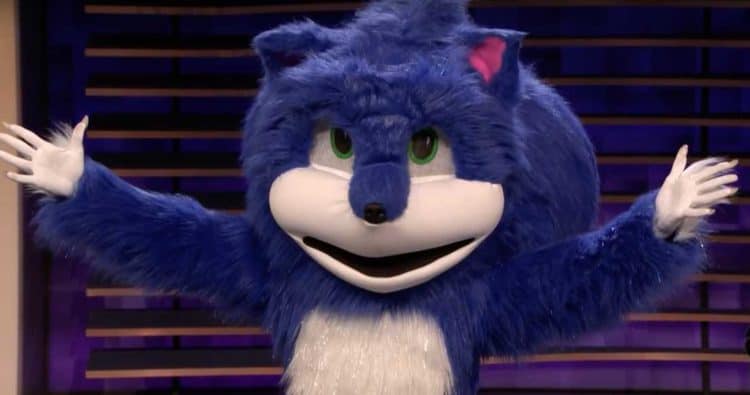 It doesn’t take much to make people freak out on the internet these days, all you’ve got to do is say one thing or show something that fans don’t like or agree with and they flock to social media to tell you just what they think in some of the most unintelligent ways imaginable and in some cases with a heaping dose of the worst grammar you could ever imagine. In this case though the redesign of Sonic the Hedgehog that showed up on the Conan O’Brien show really goes to show what COULD happen if too many trolls decide to speak up at once and studios feel pressured to just get something out there that is a little better but is more about appeasement than the kind of quality that people are hoping for. Of course, thankfully, the teeth are gone, but it seems safe to say that we can imagine what might happen if Sonic suddenly went X-rated. Some fans might actually be pretty excited, in a sort of sick and twisted way, while others might faint from absolute shock. Jennifer Maas of The Wrap has more on this subject.

But the lowdown on this is that the Sonic movie has been given a serious redesign and the character now looks far more like the video game version, which is to say big eyes, bigger head, big hands with big gloves, massive shoes, pretty much out of proportion just as a video game character should be. Oh yeah, and the teeth are gone, as I mentioned, which was freaking people right the hell out for some reason, as though Sonic being a talking hedgehog the size of a small human wasn’t enough. But hey, they’ve got to appease the trolls as Joel Stein of Time might sarcastically agree, and it has to happen NOW since people are hell bent on getting their way in this era or so help them they might strike, or protest, or just write some really nasty letters allowing people to realize how disturbed they are. Get the idea? This whole redesign was basically a way to make sure that the studio wasn’t about to lose money on a venture that’s already been wildly popular in the gaming industry and in other media. But while Sonic does admittedly look better in the latest trailer the idea that a large group of internet trolls could sway this outcome is becoming problematic since quite honestly I’ll admit that I’ve voiced my opinion plenty of times, but rarely have I ever thought that if thousands and thousands with the same opinion chimed in that anything would change. Why you ask? Well that’s pretty simple, the directors that create these movies and the design artists have a specific vision in mind most of the time and tend to run with. In fact a lot of times there are entire folders filled with concept art that the artists and creators might pore through in order to get the right image. The funny thing, the REALLY funny thing, is that virtually anyone can come up with a story or an idea and make it their own, and possibly forward it to those that might be interested in taking a look.

Without any credentials behind your name it’s likely that your proposal might get tossed in the trash unless someone somehow sees some promise in it, but hey you tried. Unless a person is willing to go through the hard work and effort of making their own movie or reaching for that star and trying to become a director that might one day take on a project that they’ll want to put their own spin on, the chances are that the internet trolls will continue to bark and snarl and the majority of the directors and creators in Hollywood will keep doing their own thing. Sounds a little defeatist doesn’t it? After all I am one of those that has always said that the fans make pop culture popular, as without us there would be no reason for pop culture to exist. But the caveat there is that if you’re going to criticize the entertainment you’re being given, even if you have to pay to watch it, you might want to try staying as objective as possible since if something fictional offends you then there’s one easy, simple thing you can do to make sure it doesn’t offend you longer than it has to. DON’T WATCH.

I know, it’s easier said than done because a lot of people for some reason love to be miserable and force themselves to watch things that they don’t like just so that they have something to chew about on the internet. But when it comes to Sonic the Hedgehog, this time, the fans might have actually served a purpose. But don’t let it go to your heads, since the sun even shines on a dog’s ass somedays, as Sydney Dean might say.