I feel like I’ve written 600 Logan articles in the last week but I wouldn’t be doing my job if I didn’t report on the stuff that I know audiences out there are going to enjoy.Â  Fanart is something I personally enjoy and when you can find out more about the concept of a movie and how it evolved from beginning to finished product I think it’s always time well spent.Â  Recently some concept art was released from Logan today and it’s pretty impressive.Â  Not only the quality of the art but what the pictures actually tell us about what could have been.Â Â  According to Comic Book

Things certainly look a tad more Mad Max than they did in the final product, and as you can see, Wolverine at one point had a canine companion. Why that was scrapped is hard to say, but perhaps we were going to get a John Wick style twist here!

Talking about the fourth piece below, artist Shae Shatz says it was, “an idea for the flashback sequence for Logan where the bad guys reside.” That’s a sign we were going to spend some more time with the movie’s underdeveloped bad guys, while the final image does indeed appear to be Alkali Lake as he adds that, “we were trying some different ideas and locations within the Logan universe.”

Hopefully more concept art from Logan will be unearthed over the next few months.Â  It’ll be interesting to see if X-23 had a different original look. 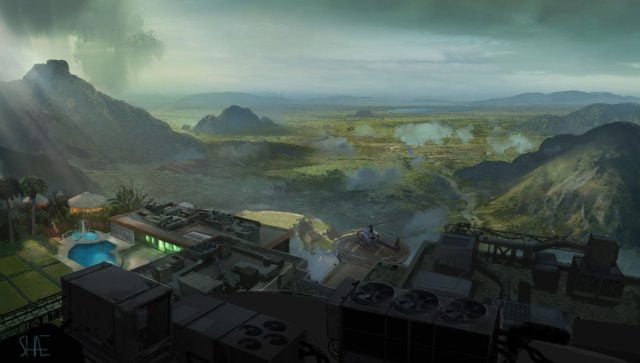