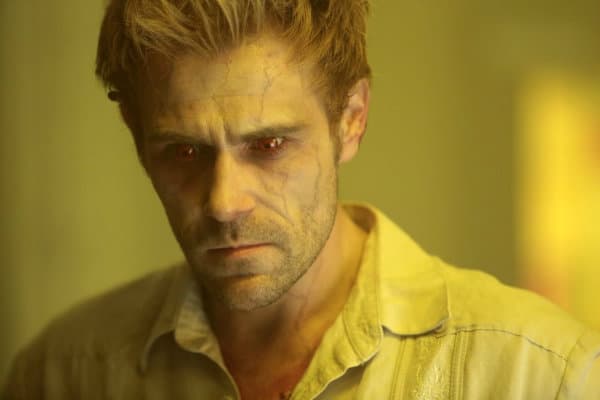 After the successes of ArrowÂ on The CW and Marvel’s Agents of S.H.I.E.L.D.Â on ABC, comic book adaptations became the “go-to” idea for network television for the 2014-2015 season. The CW continued to build their universe with the very successful The Flash, and they are hopeful that the recently debuted iZombieÂ will prove popular enough to continue. FOX crafted their own corner of the DC Universe with the already-renewed Gotham, and ABC added again to the Marvel Cinematic Universe with its Hayley Atwell-led period piece,Â Marvel’s Agent Carter. For better or worse, NBC also tried to take a bite of the comic book pie with Constantine, based on the HellblazerÂ comic series starring John Constantine, and unfortunately, the experiment was not at all a success in the ratings. ConstantineÂ premiered low and fell lower, despite showing considerable improvement with each chapter. By the end of the show’s short, 13-episode first season, the cast and crew had really begun to find their footing, eventually crafting a story truly complementary to the rich history of the character. There is still potential for NBC to renew the show for a second season, and rumors constantly persist of another network continuing the story should NBC pass. At this point, it would truly be a shame if Constantine is not given another opportunity to prosper, and here are the reasons why:

Despite all of the very reasonable hesitance of fans after the announcement of Constantine, NBC very cleverly made the right decision by having the first promotional photo of the series feature the newly-cast Matt Ryan as John Constantine. While these early images didn’t alleviate all concerns, it showed that, unlike with the 2005 film adaptation, showrunner Daniel Cerone and the network were tryingÂ to get the fan-favorite character right. After the first season of the show, it is hard to argue against the fact that they really, truly did. Matt Ryan flourished in the role of a lifetime as John Constantine, and it was clear with every line he spoke and action that he performed that he was enjoying himself much more than he had any right to. While there are many options out there, I would say that, for me, Matt Ryan’s performance as John Constantine is the greatest and most accurate adaptation of a comic book character on the television medium. Ryan brings a depth to the character that I had no idea would be possible outside of the pages of a comic book, and I have never been more excited about a fictional character’s in-universe history and future than I am about John Constantine in this adaptation.

While the non-Constantine main cast has, more or less, held their own with Matt Ryan, it is hard to argue for a better performance by a recurring character than Emmett Scanlan as Jim Corrigan, the future Spectre. I was unfamiliar with Scanlan aside from a solid (if minor) performance on The Fall, but the character of Jim Corrigan has always interested me. Scanlan has owned the role in only two appearances, and his performance in the Season 1 finale truly showed the potential of the character. Constantine, however, is definitely playing the long-game with the origin of The Spectre, and it would be an absolute shame if they are never able to complete this story due to premature cancellation. 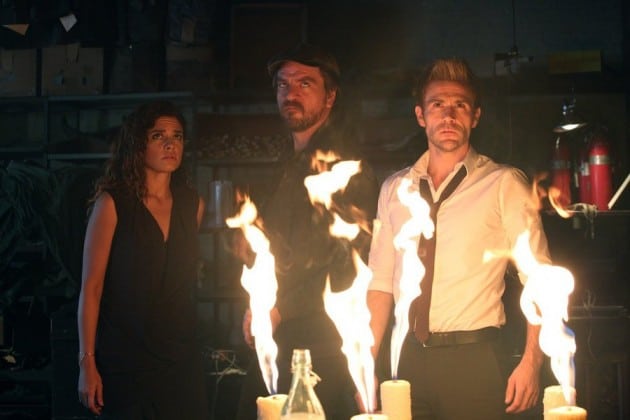 While the source material from HellblazerÂ obviously provided a strong foundation for Constantine, it’s truly a credit to the series that the first season ended with as much potential as it has. Zed and Chas, debatably, were underutilized, but the final stretch of episodes really opened up their characters for a deeper exploration later on. Manny was finally brought deep into the overarching story by the finale, and I think we all would love to see more from characters such as Papa Midnite, Felix Faust, and the Newcastle Crew. In addition to the characters and stories already introduced, the producers have expressed a strong interest in bringing characters from the Justice League Dark into the fold, potentially allowing for fan-favorites such as Zatanna, Andrew Bennett, Swamp Thing, and more to play major roles in the storyline of the show going forward, should it be allowed to continue.

The Cast and Crew’s Excitement

Cast and crew interaction with fans doesn’t necessarily dictate what shows I do and don’t like, but there’s definitely a real connection between the two. The entire cast of ConstantineÂ frequently live-tweeted and answered questions about the show, and showrunner Daniel Cerone has been as absolutely transparent about production, ratings woes, and renewal chances as he can. The entire renewal process for ConstantineÂ has, more or less, been discussed consistently by Cerone since the first season was not picked up for additional episodes past the originally-ordered thirteen, and it has really shed a light on production aspects that viewers would otherwise never know about. Aside from the transparency, though, it is clear through interviews and tweets that the cast loves the jobs that they have been able to do, and I think that they want the opportunity to tell more stories just as much as the most hardcore fans of the show want to see the stories brought to life.

ConstantineÂ has not yet been renewed for a second season, but it has also not been cancelled. According to showrunner Daniel Cerone, NBC will listen to pitches at the end of April for the second season before making a final decision.

Do you think Constantine deserves a second chance? Sound off below!