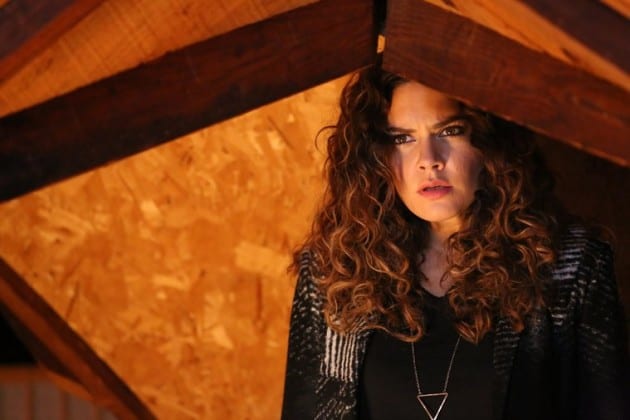 Last night marked the season finale for the ratings-struggling DC supernatural drama Constantine,Â as John Constantine (Matt Ryan) faced one heck of a demon, while a big player in the series revealed his true side as the finale ended with a huge twist.

So what ended up being the season’s final case of the week? It ended up being a satanic killer only known as “The Man” who really should have been referred to as “The Creeper,” but maybe that’s just me. The whole idea of him having young girls being his wives and then recruiting future brides for him was just unsettling to watch, so you can imagine how much I was cringing while re-watching the episode for a second time. It’s interesting how more gruesome these past few episodes have been despite now being at 8 p.m., as opposed to the episodes we saw during the show’s 10 p.m. time slot.

It was somewhat hard to feel for Vesta after this episode, because she selfishly put herself in that situation by following strangers and then falling right away for the idea of getting married just because it had always been “her dream.” But not to be a completely heartless person, it was good to see her get out of there before the creeper was able to cause more damage. However, out of all the victims that I have seen this season, Vesta was definitely the one I cared the least for because she got herself into that situation because of selfishness.

While Chas was sadly not around for the finale (and possibly last episode of the series), we did get to meet a favorite back from the first half of the season: Jim Corrigan, once again known to comic book fans as The Spectre, who got very close with Zed. Zed didn’t have it easy though because of her constant visions, hinting that Spectre was going to die. However, seeing her finally tell him in the end of the episode, which included them sharing their first kiss, was neat.

Another favorite returned for this finale, and it was good old Papa Midnite, as he was still focusing on taking down John Constantine. Is it just me or was this the first time any TV show or movie used a “voodoo zombie”? If it’s something that already exists, then it was the first time for me. That act was more interesting than the satanic killer plot because Midnite and John’s interactions are just so intensely fun to follow. When they came face-to-face again at first, John ended up getting shot in the side, and I still thought that this was real and that it was actually him getting shot. However, the minute Midnite shot him in the head, it became too obvious that it wasn’t John, and the real one showed up from the behind and kicked his butt.

Now let’s discuss the big elephant in the room, or should I say devilish angel? After Manny had his chat with John, he showed up in the last scene to help Midnite escape and revealed that the Rising Darkness has been working for Manny this whole time. This was perhaps the best cliffhanger I have seen this season, but also the most frustrating one as now I want the show back more than ever. What does this mean? Is Manny, perhaps, the devil? Whether ConstantineÂ ends up getting renewed for a second season on NBC or gets moved to SyFy and re-titled as Hellblazer (although those rumors has been debunked), I just need this show to come back.

The finale proved a lot of things to me, but one thing in particular it proved is that ConstantineÂ has more great stories to tell, Due to the fact that it’s a DC property, it has an incredible library to use from. I was very satisfied with the episode, but more frustrated with the fact that this might be the end of it.