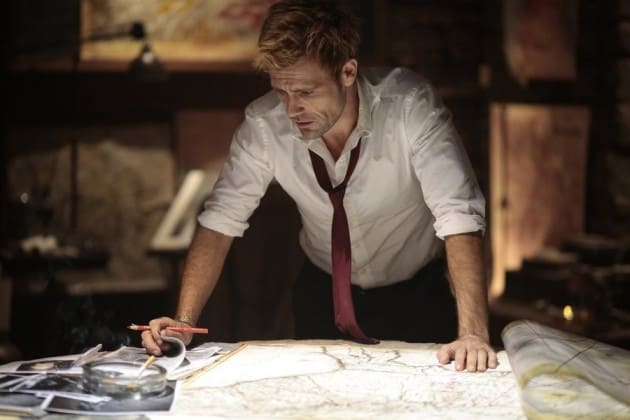 Last night’s episode of the DC supernatural drama Constantine took one step backwards in terms of quality, for understandable reasons.

Apparently, this episode was the second episode that was shot, but unlike how shows like Firefly and Almost Human was treated in the order their episodes aired, I can understand why they had to move this episode to a later airing. They wanted to introduce Zed Martin as quickly as possible and based on the love that I have gained for that character, I was perfectly fine with this episode being the sixth one instead. Aside from a brief reference to why Zed wasn’t present in “Rage of Caliban” from Chas, it still can’t be denied that this episode felt very odd.

We have seen several storylines in TV shows and movies where children have been possessed by demons, although I will admit as someone who isn’t the biggest fan of the horror genre, I have very limited interactions with stories like this. But focusing on the way the show dealt with it, I really enjoyed it. In a way, it tells us more John’s struggling feelings from the Newcastle incident. The relationship between Manny and John is fleshed out a lot more in this episode and despite that Manny is continuing to be this big mystery, we do get some great answers to why he is acting the way he is. Seeing John ask the questions that we as viewers ask while watching the show, is a strong element because it shows that he is just as frustrated as we are.

The thing that was most interesting in their big scene was when Manny revealed some of the horrible incidents that John had to go through as a kid whether it was his father burning him with his cigarette or about his sister. First off, does John Constantine have a sister in the comic books? I’m almost willing to bet that the sister will be coming in at some point because it would feel somewhat random if they didn’t introduce her after Manny mentioned her. But looking at Manny as a whole: has he perhaps been watching over John for his entire life? That would explain so much while at the same time bring up so many more new questions.

It has been made very clear that the special effects and visuals on this show are mind-blowing and we saw that again last night. I think one of my favorite sequences of the series so far was when John confronted the demon at the end. It was freaky, but cool for so many reasons. Overall, this was a decent episode, not one of one the best ones, but still a pretty enjoyable episode. With the news that came out last week that the show isn’t going beyond 13 episodes in its first season, I’m very mixed on this. On one hand, I have always said that I wanted this show to be only 13 episodes per season as some shows are sometimes better when they aren’t the typical 22 episode format.

However, I do think it’s concerning that they decided to announce this only a few days after the positive ratings had come in for the fifth episode (which is one of my favorite episodes so far because of Jim Corrigan). The thing to remember here is that the show hasn’t been cancelled at all, the actors and the producers have confirmed that several times on Twitter. Heck, an NBC executive apparently e-mailed one of the show-runners asking why people was so concerned as the show hadn’t been cancelled at all. If you are a network executive and have a show that airs on a Friday night at 10 PM, you should be happy if the numbers are over 3-4 million viewers. In addition, you will have DVR and streaming numbers (Hulu, Amazon, iTunes) to take into consideration as well because while I’m not looking at Friday nights anymore as the “death slot”, it’s definitely one of the tougher nights on TV.

But I definitely encourage everyone who is reading this that if you are a DC Comics fan and want a great show to watch on a Friday night: Constantine is it. It’s definitely finding its legs and with time, it will be a very strong show and I have been a huge supporter of this project since they stepped it up in episode 2 with Zed.  We have two more episodes to go before the show goes on a hiatus and will be back in (most likely) early January so keep watching and introduce the show to your friends during the hiatus if you want this great and growing show to get a second season.