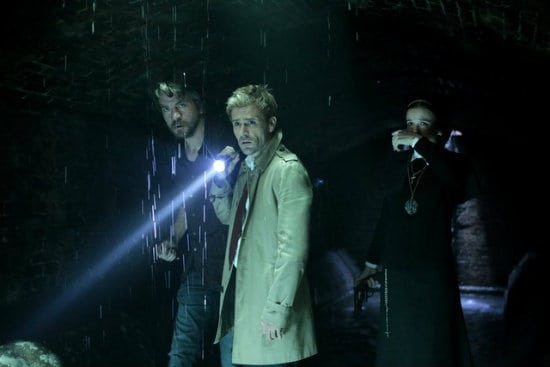 There are no stops of how intense DC television winter finales can get and last night the fourth show, Constantine went along with following that trend.

The episode promised that it would start exploring the whole Newcastle mystery that was established in the pilot and that’s exactly what we got. It was through the introduction of the character of Anne-Marie, one of the Newcastle crew members and someone from the Hellblazer comic books. I really enjoyed this character, despite what she did at the end of the episode, and I thought Claire van der Boom was great in the role.

Despite all the great demonic action that we got in “The Saints of Last Resorts: Part 1”, I was more compelled and interested in the scenes between John and Anne-Marie. Don’t get me wrong, I’m always interested in some great action and special effect scenes, especially with mid-season finales, but I feel that we have been getting so much of that lately on this show and so little about Newcastle that I cared more about the emotional scenes.

If I have to choose between either getting stunning shots of demons and creatures or deep character development for either one or more of the core cast, I will always go with character development. Listening to the background that John had with Anne-Marie and how deep it went made the character more fleshed out and that once upon a time, he wasn’t the man he is today. I love John for what he is as of right now with his wit and charm, but it’s definitely engaging to hear that he was somewhat different before.

It also makes the whole Astra aspect more intriguing because it obviously affected him deeply as we have seen in several past episodes. Matt Ryan and van der Boom had a great dynamic together on screen and even though Anne-Marie just kept resenting him, most of the time, they clicked well. What this arc really did for the viewers was revealing that the “Rising Darkness” is that the enemy has found a way to merge hell and Earth to one. Yeah, that wasn’t mind-blowing at all, spoiler alert: it totally was mind-blowing.

Meanwhile, while John and Chas were dealing with all of that, Zed has her own adventures back at the house with Eddie trying to get her to go to her father who wants Mary (Zed’s real name) to come home. Is it just me or did anyone else feel and think “she doesn’t come off as a “Mary to me”?Â  And of course because this is television, the doctor person ends up injecting her with something and tells her that it’s time to go home. Although it was fun to see her kicking butt at first so there is that.

The episode ends on a huge cliffhanger as John and Anne-Marie tries to get out with the kidnapped babies before getting followed by this creature “Ivunche” and in order to get out of there alive, Anne-Marie shoots John. Now trapped there alone with the Ivunche closing in on him, John is in a lot of trouble. Looks like Arrow’s Oliver Queen wasn’t the only one to get seriously damaged, although unlike John, Oliver is as of right now 100% dead (for now).

This was a great episode to wrap 2014 up with and it was also another strong winter finale for the comic book TV line up that we have had this fall. January 2015, feel free to get here as soon as possible because I need some answers and I need them bad!

Constantine will return with brand new episodes on Friday, January 9 at 10/9c on NBC.