Boston Legal, the dramedy created by David E. Kelly, aired on television from 2004 to 2008 and starred William Shatner and Candice Bergen. During its five year run it racked up five Emmy Awards. Now, Boston Legal is going into syndication and will be airing weeknights at 11:00 p.m. EST on TV Land (check out the show page at the TV Land website). 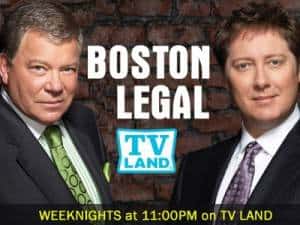 William Shatner and James Spader star in the Emmy winning series that combines thoroughly irreverent comedy with completely relevant drama. You don’t want to miss it.

Boston Legal is now on TV Land and there are so many reasons to watch: The Emmy-winning performances, the ripped-from-the-headlines stories, the possibility of seeing William Shatner drop his pants in a courtroom. You don’t want to miss it.

Where do I turn when I need legal advice? That’s right, TV Land. Now that they air Boston Legal I’ll never pay for one of those ‘board certified’lawyers again. I get my legal advice watching William Shatner and James Spader. It’s not only funny… it’s free. Give it a try.

In honor of the show, TV Land is putting together a contest for readers of our site – a chance to win a $50 gift card for VISA.

Contest Rules & How to Enter:

Boston Legal giveaway is open to participants with a United States mailing address only (international readers can enter if they have a friend in the States who can accept their prize by mail).

To enter, email me at clarissa @ tvovermind.com. Put “Boston Legal Contest” in the subject line of the email.

The winner of the contest will chosen at random at 5:00 p.m. EST on March 31, will be notified by email and will be asked for their address. The gift card will be mailed out shortly thereafter.

Good luck and don’t forget to watch the show!