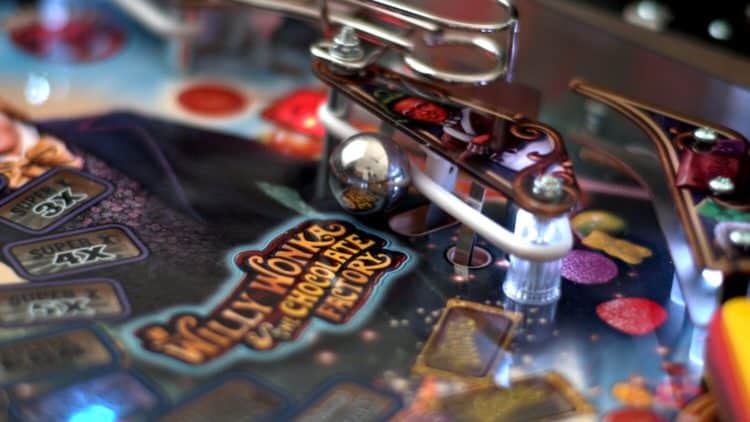 Admittedly, a lot of people don’t think that much about the dynamics of pinball when they’re playing the game, and some people don’t even play pinball any longer since it’s an old game and one that can’t really compete all the time with the games that are out there now. Some folks have pinball machines in their homes, others don’t mind dropping a quarter or two now and again when they can find one. But the workings of a pinball machine when seen in slow motion are kind of interesting, to say the least. The fact that the underside of the playing surface is dotted with solenoids and various other parts isn’t surprising at all since something has to run the thing, but upon hearing how quickly all of this works it’s still not surprising but it’s definitely more impressive since just trying to comprehend how the first pinball machine was made and how it might have worked is enough to make a person wonder how this machine didn’t get any bigger than it’s been for so long. A good answer to this is because it’s a game and however it happened, someone didn’t feel like putting any more money into the evolution of a pinball game since it’s fine just the way it is.

But learning how it works and seeing how it looks in slow motion one can appreciate the craftsmanship that goes into these games since there something to be said for a game that can take this kind of continual punishment and still keep working like this. It’s also not too surprising that the glass barrier is a sound barrier, kind of, as well as a safety measure since the metal ball can come flying up from time to time if the game gets a little too crazy and the player a little too overzealous. I’ll bet a lot of people that have played pinball more than once in their lives might have found themselves getting frustrated at the machine a time or two since their reaction time either isn’t good enough or, possibly, the maintenance and upkeep on the machine wasn’t tended to by the owner. It’s very possible for a pinball machine to break, just like anything else that has moving parts, and it’s necessary to clean and maintain these things now and again. Considering the impact that the machine has to deal with and the fact that it’s kind of taken for granted by a lot of people, it’s easy to think that a lot of these can fall into disrepair pretty easily since they’ve become antiques in some cases and are just kept around for show.

There are still plenty of people out there that can remember when pinball machines were pretty cool since when you really think about it, they’re still a bit of a challenge and it would be funny to watch a gamer of today try to master a pinball machine. Some of them likely could, but there would also be plenty of people that might get mad and simply quit after a while since pressing the buttons on the side of the game is a lot different than pressing various buttons on a control. For one thing, you can’t really keep your attention on one flipper or the other since a player has to be aware of what’s coming and where the ball is going to go with each hit. It is possible to aim with a pinball flipper, but it takes a lot of timing and practice to get good with it, as a good number of people could attest to. Some folks might want to laugh at anyone who says they were great at pinball at one point or still are, but that laughter might fade out if a person decides to challenge someone that actually is skilled at the game since a lot of is instinctual and comes down to knowing how to time everything and how each ricochet is going to work. It’s a lot to take in, but gamers today manage to multitask so easily that some of them would likely get it pretty quickly while others might just get frustrated since as I mentioned, your hands are in different positions and it does require knowing how to anticipate the balls since there’s no set program to a pinball machine other than what’s bound to happen when certain areas of the game surface are hit.

Watching all this in slow motion is cool since one has no real grasp of how fast everything is going until it’s slowed down and measured. At that point, people can come to realize that what we perceive is only half as fast as the machine is really going. This might not make you want to play a round of pinball, but it’s definitely interesting.