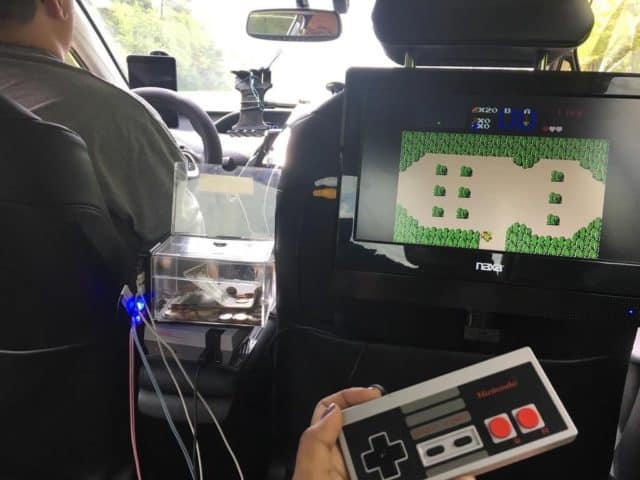 You see that tip jar back there?Â  If I’m the passenger in this guy’s car I’m filling that thing up with all the cash I have in my wallet (which is usually less than $5 but still).Â Â  If you’re going to be an Uber driver then learn from this man.Â  He set up an NES in the backseat of his car and I have to see it’s easily the most genius move any Uber driver has ever made.Â Â  “Did you ever get to ride in the the guy’s car who has Nintendo????”

Think about how fast word is going to travel for this guy.Â Â  I hope that thousands of Uber Drivers get wind of this picture.Â Â  If they do then perhaps we’ll get a nice way of NES backseat Uber cars.Â  Which reminds me.Â  This could start a chain reaction of Uber cars who decide to really spice of their cars with cool amenities.Â Â  I mean how about some gum?Â  How about a little spritz of cologne?Â  Back seats of Uber cars should become the bathrooms at Gentlemen’s clubs.Â  I’m calling it right now folks.

This is a million dollar idea.Â  Mark my words.