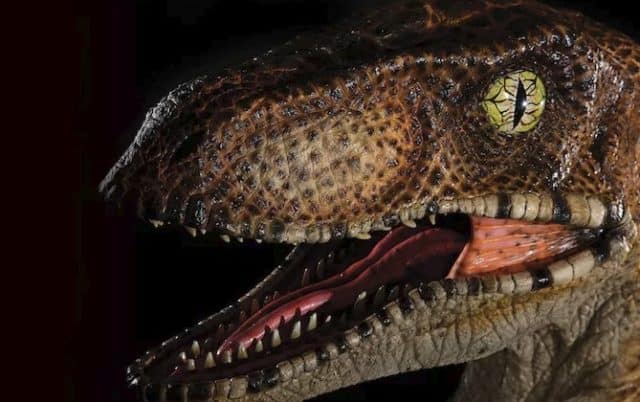 A lot of people absolutely fell in love with the deadly velociraptors that were shown in Jurassic Park and Jurassic World. That could be why the merchandise depicting their heads and the rest of their bodies could be so popular, largely because the head region is considered to be one of the deadliest parts of their entire body thanks the fact that like any creature it’s the center where thought becomes action and action becomes the kind of deadly force these creatures are known for onscreen. Even if they’re nothing like their real life counterparts in terms of looks their reptilian countenance is still enough to unnerve a lot of people.

Seriously, imagine having that face looking at you and thinking about what your spleen tastes like.

How easily you get freaked out would make all the difference when having this pillow since those cold, reptilian eyes seem to watch you wherever you go. Having it on your couch might not be the best thing to wake up to in the morning, while having it on your bed might make sure that it takes a little longer to go to sleep. Of course keeping it on the floor might make the really jumpy folks from walking in certain areas.

The number of toys that were made from the films is immense since the raptors were simply one of the absolute most popular characters in the entire movie. There’s something to be said about a creature that hunts in packs, is smart enough to plan an attack that can fool a supposedly smarter hunter, and will take on a T-Rex at the drop of a hat. Of course it’s hard to know if the real life creatures were like this at all but in the movie at least it was cool to watch.

You had to know that stuff like this was coming since Disney is in almost everything these days and knows how to market to kids in a way that allows them to get in on the merchandising that is so prevalent. There are a few princess t-shirts out there like this one and while there’s no evidence that they’ve sold all that well they do have a certain playful charm to them.

If the pillow would get the super jumpy people then this would get just about anyone else. This thing looks like it’s coming right through the wall and after it bashes its way through will be coming to dine on your gizzard for the trouble. Seriously this is the kind of wall mount that would be great as a practical joke or for use by a real movie enthusiast that loves this kind of thing.

This is as ultimate as it gets when it comes to love the velociraptors from the movie. This suit costs an arm and a leg but the quality that went into it is so great that you can’t help but think that this is something you’d keep around for a while even if you didn’t wear it.

Despite not being the same as their real life counterparts from so long ago, these raptors are just flat out cool.