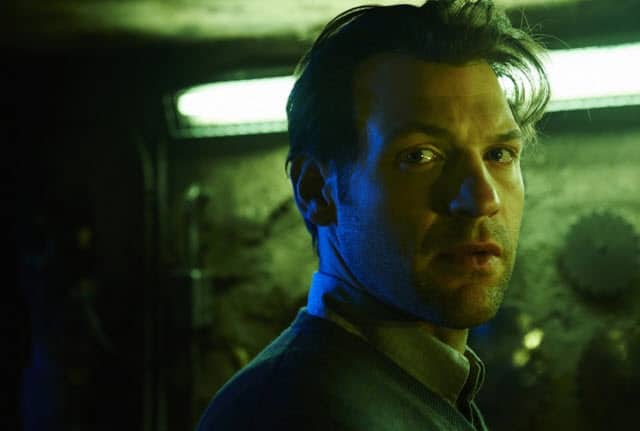 If you’ve been watching Guillermo Del Toro’s The Strain on FX, you were probably excited to see House of Cards veteran Corey Stoll in the cast. The man had an amazing run on the Netflix show, and had his pick of projects afterward. But for many, it was hard to even recognize him, as his signature bald dome has been replaced by one of the most obvious hairpieces on TV.

Stoll knows everyone is talking about his wig, but feels obligated to explain why it exists in the first place. Here’s what he told Vulture.

“For somebody who is follicle-ly challenged, I spentÂ a lotÂ of time talking about hair. At first, when I heard he wanted me to have a wig, I was resistant. I didn’t want the reason to be so I could look like a standard TV guy or a hero. Then that points to a bigger problem. I’m not interested in playing that character. I made a choice in my career to not get hair plugs and not hide the fact that I was balding, and I’ve managed to play all sorts of characters who have shaved heads. But Guillermo’s reasoning was so well thought-out. It isn’t arbitrary. It isn’t,Â I want you to look better.”

And just in case you hadn’t heard Guillermo’s reasoning that’s being referenced, here it is via THR:

“If you know the books or where it’s heading, we needed the character to change his look, to be able to mix into the normal population without being seen,” del Toro explained. “We needed him to have a look that could be altered … and unless he grows a beard or has an eye patch, we needed somewhere for him to go.”

In other words, Stoll will obviously be shaving his head at some point down the line, but if he started bald, there wouldn’t have been anything significant to changeÂ to.Â It would be like if in Taxi Driver, De Niro had a mowhawk the whole movie, or Natalie Portman started with a buzz cut in V for Vendetta. The effect wouldn’t have been quite the same. Needless to say, I think we’re all cheering for the pending death of that wig all the same.