Home
Movies
Could Arachnado Be the Next Sharknado? 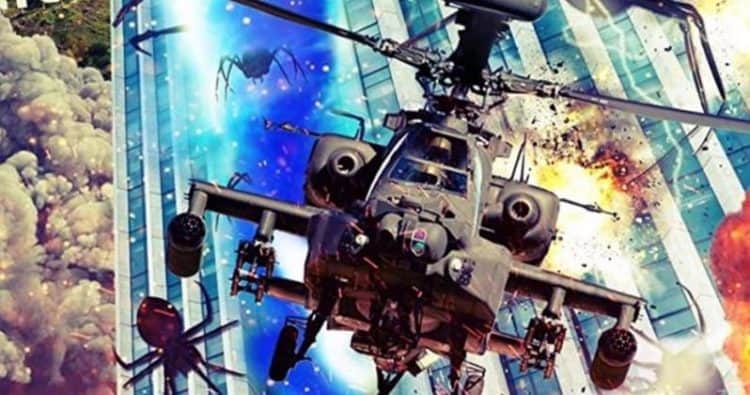 Does anyone get the feeling that someone is playing a round of ‘Can you top this?’ when it comes to natural disasters? Sharknado felt like it would have been the top of the list, the apex predator storm that would end all storms, but apparently, someone begged to differ since Arachnado is now an idea that’s been implemented by those that are all about the low-budget thrillers that people somehow pick up and proclaim to be worthy as horror flicks. If you’re scared of spiders then this is likely the wrong movie to pick up, but if you can handle the scurrying of the eight-legged arachnids then it shouldn’t be too bad since the production value couldn’t go much lower as one might expect, since this time around it’s a cyclone that’s depositing its dangerous cargo into the middle of one neighborhood after another, and as many might already know, spider’s are both less and more insidious than sharks, since not only can they maneuver around smaller spaces and enter more secure areas, but to some people, they’re infinitely creepier. Seriously, some people would rather swim with sharks than even come close to a spiderweb, and it’s largely because spiders just look creepy, with their cluster of eyes and their eight spindly legs trembling at times and ready to propel them forward or launch them into a jump. Excuse me while I go brush off that imaginary tingle that just danced across my shoulder blades.

Is this the new big sensation? It’s hard to say yes or no because saying yes means that it’s time to start banking on this idea and possibly hyping it up since it could actually be rightfully terrifying if it had a bit more of a budget to work with. But saying no feels a little too dismissive since there were likely a few people that said that Sharknado wouldn’t go anywhere, and look what happened. Okay, that’s not a perfect example since Sharknado was kind of ridiculous in a lot of big ways, but at the same time, it managed to pull in a great deal of interest and a lot of star talent that might have been mostly cameos but was still noticed by the people watching. And if you want to be entirely honest, the Sharknado movies were embraced in a big way simply because they were ridiculous, and because they were able to give people a huge laugh. This movie doesn’t feel quite as capable of giving people the kind of laughs they want, since the general feeling of spiders is that a lot of people find them to be insanely creepy.

But there’s always a chance, right? There’s always that off chance that the movie might find some sort of purchase within the psyche of someone that’s willing to pay to see another one made, this time with even better effects. Just imagine Arachnophobia meets Twister, with added effects and the kind of budget that can bring in a tad of the Eight-Legged Freaks feeling that could truly terrify people. Or would that be left for a sequel? Think about it, a cyclone that picks up an untold number of spiders and then rolls over a toxic waste spill that allows the spiders to grow exponentially, or even become intelligent. Oh yeah, the ideas for this are simply too many and too much to contemplate at this moment since it feels like something that could spin out of control in a heartbeat. Spiders are an easy sell when it comes to horror, so long as the budget is there and the ability to deliver them to an unsuspecting populace is a part of the storyline. Even worse is the fact that spiders are insanely strong for their size and quite deadly when taking into account what they can do and how they tend to feed. Okay, I’m actually starting to creep myself out a bit at this point, but the idea that spiders could become a seriously big problem, as big as a Sharknado, is something that many writers might have little to no problem with when it comes to developing a story. But as of now we really should be wondering what’s going to come next. Would anyone even consider pairing another deadly beast with a natural disaster? Maybe a series of earthquakes that creates an opening to a lost world beneath the earth’s crust, thereby allowing dinosaurs into the world again. Yes, it sounds like an Ice Age movie, I get it, but with a lot more dire implications where humanity is concerned.

At this point, it feels like even talking about these types of ideas is just a way of begging for 2020 to get worse, but it’s still an interesting idea that deserves at least a little bit of respect.