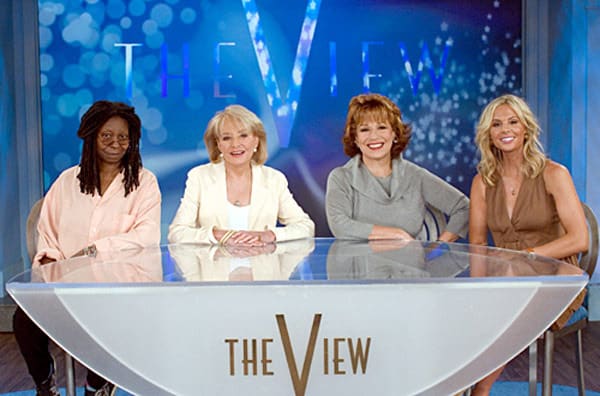 The cast has changed, the guests have come and gone, and for two decades now the View has endured as one of TV’s top talk shows despite its many detractors and the storm of criticisms it has endured throughout its time. This show has seen its up and downs but somehow and sometimes against all odds it has remained as one of the top, most-watched programs throughout the last twenty years. Some people don’t like it, others love it, but the fact of the matter is that it is one of those shows that is able to roll with everything that comes along and takes it all in stride as it puts the negative behind it and looks forward to the next day. In other words there have been times when it’s just one long catchphrase that people need to get through their day.

No, I’m not a detractor, but there have been times when simply hearing about the show was enough. It’s a success and it’s a very desirable show, but it is also an acquired taste for many. That could be why these crazy moments that are listed below are considered to be some of the more notorious highlights to be seen in the show’s long history. So enjoy.

A lot of men might have tuned into the show just to see this moment. It might be offensive but it was making some sort of point I’m sure. On a show that was hosted by women for women and about women, well, at least this seems to be the case at times, it was obviously taken more as satire than anything offensive according to the crowd’s reaction. Still, double take-city.

You could sense the moment when Kathy Griffin got derailed and to be quite honest you could feel the burn no matter where you were sitting. There’s a guilty pleasure at being able to watch Kathy Griffin being silenced if only for a moment. She lives for that moment? Right then it looked like she might have gladly lived for slapping the taste out of Elizabeth’s mouth. I think Hasselbeck could take Griffin though.

Passing gas on live TV is usually one of the most embarrassing things you could ever do, but a woman like Whoopi Goldberg, funny, engaging, and obviously able to crack a joke at her own expense, can so easily play it off that it will at least draw a giggle or full on laugh from those nearby. Their real feelings might come out later about the incident but at least in the moment it was diffused, and hopefully dissipated, as the crowd and the hosts got a good laugh.

Telling Joy Behar she’ll learn was the first real mistake. Making Whoopi mad was the second. The third worst mistake that O’Reilly made was that he kept talking over the entire cast without giving them a chance to talk in return. He might be classified as one of the more belligerent guests to ever come on the show, but then again supporters of O’Reilly and others like him don’t generally call it belligerence, they call it being honest.

So if the world was flat you might wonder why so many people haven’t just fallen off the edge as of yet. B.o.b. is entitled to think what he wants just like anyone else but the next time he goes searching for the edge maybe someone should tell him why the landscape keeps rotating away from him. Last time I checked most flat surfaces have a definite edge to them, and at one point you will fall off. But you keep on talking B.o.b.

The View has definitely had their share of crazy moments, and chances are they’ll have more to come.