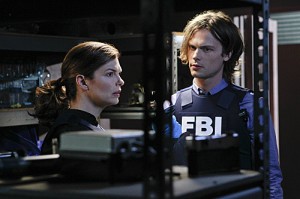 The BAU team travel to Austin, Texas tonight on Criminal MindsÂ to investigate victims who share an unusual connection. We will also get another glimpse of the season long unsub who is taking an interest in the personal life of the team and with their recent cases.

The case tonight has both female and male victims, victims who are killed in different ways but all who share one signature; a watch set to an inaccurate time. This time has to signify something and it is down to Hotch (Thomas Gibson) and the team to figure out what the connection is.

We will get a glimpse of Alex (Jeanne Tripplehorn) teaching tonight and it is always good to see members of the BAU outside of their crime work. Alex has been a good addition to the team and despite Prentiss (Paget Brewster) being a fan favorite, it feels likes Alex has been welcomed by viewers.

The Replicator story has been slowly progressing this season and while we don’t know much about this unsub, we do know that he has been monitoring the team outside of their BAU work, alongside the cases they have been investigating. This plot will be stepping up a gear in the coming weeks. Another story that will be revisited soon is one that involves Morgan (Shemar Moore) and the abuse he suffered as a child. We will return to Chicago and the youth center storyline that was introduced in season 2.

Watch a promo for tonight’s episode “Broken” below.