Home
The CW
Arrow
Crisis On Earth-X Is the Best Arrowverse Crossover Yet Because Of Its Heart, Not Its Heroics 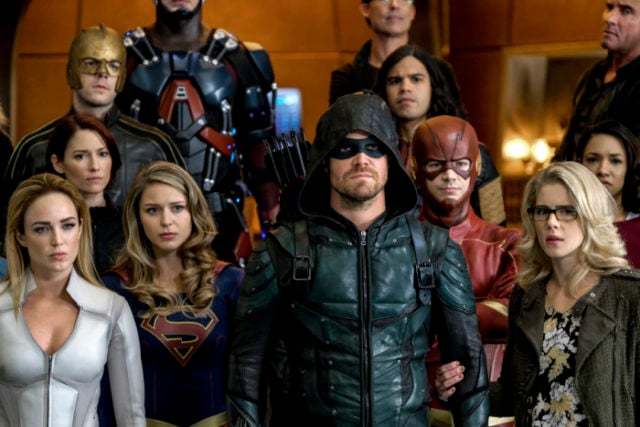 Last night’s episodes of The FlashÂ andÂ Legends of TomorrowÂ served as the two-hour conclusion to this year’s two-night, four-hour DCTV crossover, “Crisis On Earth-X,” which kicked off with SupergirlÂ andÂ ArrowÂ on Monday. It marks the fourth year in a row that The CW’s DC superhero series have done a crossover together, and “Crisis On Earth-X” was by far the most expansive, action-packed crossover yet, featuring the largest cast of heroes these shows have ever assembled together and the most dangerous threat they’ve ver faced: evil, Nazi doppelgangers from Earth-X.

However, despite all the incredible action and intense fight sequences that were on display throughout the two-night event, what made “Crisis On Earth-X” work so well and, in my opinion, stand as the best DCTV crossover yet is that it wore its heart on its sleeve and spent just as much time (if not more time) with its characters out of their superhero suits as it did with them in them. These four episodes focused more on the richly developed relationships between these individuals, connections we’ve seen grow and evolve over the years. “Crisis On Earth-X” was all about love, and that’s what made it so satisfying. 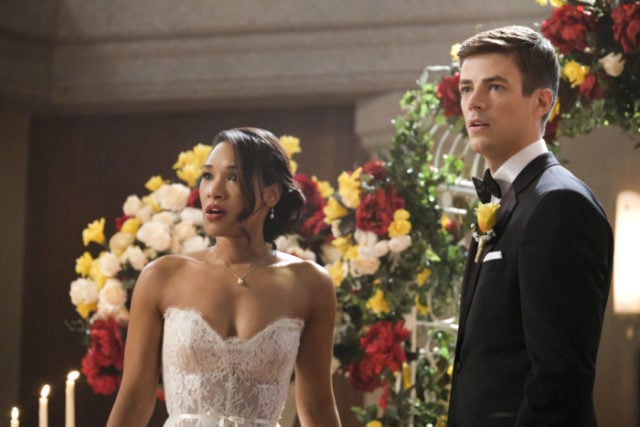 And by “love,” I don’t just mean romantic love, although let’s take a second to talk about that amazing final scene, in which both Barry and Iris and Oliver and Felicity got married with the infallible John Diggle officiating the ceremony. The scene features many sweet and tender moments: Barry speeding to Star City to bring Diggle to the park (and Diggle’s hilarious reaction afterwards); Felicity taking charge and being the one to propose to Oliver this time (Stephen Amell’s acting in this scene is outstandingâ€”Oliver’s response to Felicity’s proposal is absolutely the happiest we have ever seen him in his life); Barry and Iris’s exchange of vows (I really love her story about him joining her on stage during her dance recital); and Diggle telling Oliver and Felicity that he’s been trying to keep them together for the past six years (so true by the wayâ€”John Diggle has always been and will always be Oliver and Felicity’s greatest supporter. Sorry, Curtis).

But it’s Oliver’s words to Felicity, his non-vow vows, that really sum up what true love is, when he tells her “You’re the best part of me…I’m a better human being just because I’ve loved you.” Those words have always been reflected in Oliver and Felicity’s relationship, their journey over these five-plus years. They’ve endured their ups and downs; however, when both of them have been at their lowest, they have been able to raise each other up, make each other not only believe in hope and love and happiness but believe enough in themselves so that they know they deserve to experience and enjoy those feelings.

This is especially true for Oliver, a man who returned from Lian Yu a hollow and shattered shell until he met John Diggle and Felicity Smoak, who helped him not piece together who he used to be but forge a new identity, transform into a better man who would not only be a hero to the faceless citizens of his city but an inspiration to the most important people in his life. Oliver’s words to Felicity, this one simple sentence, is a culmination of this path he’s been on since he returned home to Star City, this path he’s been on since he first met the IT girl with the red penâ€”a path of improvement, a path of rediscovery, a path of light. Their marriage solidifies his transformation; Oliver is no longer trying to be a new man anymoreâ€”he has fully become one, thanks to the strength, encouragement, and guidance of Felicity Smoak. And with Oliver by her side, Felicity has found new opportunities, such as fighting crime with Team Arrow and creating her own company with Curtis, but more than that, she’s found genuine, non-compromised connection and happiness, something she could have never expected to find being stuck behind a desk at Queen Consolidated for years. Just like Felicity and her red pen changed Oliver’s life, his walking into her department that day changed hers. 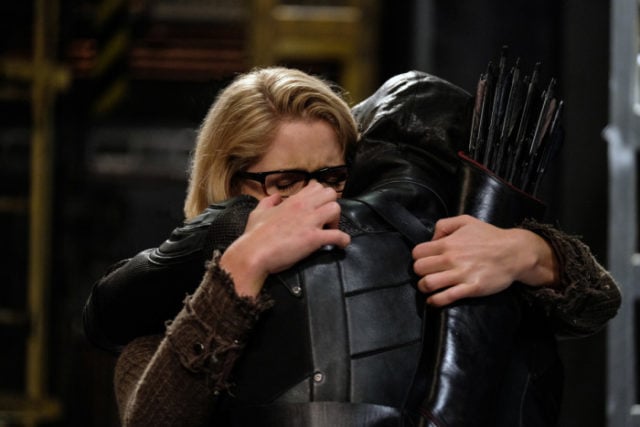 But as I said above, romantic love was only one type of love on display throughout “Crisis On Earth-X.” Just as powerful as the moments between Barry and Iris and Oliver and Felicity were some of the crossover’s darker and sadder scenes, particularly the death of Martin Stein. Most DC TV fans have known for a couple of months now that Victor Garber would be leavingÂ Legends of Tomorrow, but even with that advanced warning, I still was not prepared for the emotional impact of Stein’s death, which packed even more of a punch because he sacrificed himself to save someone who, in so many ways, was a son to him: Jax. This father-son bond between the two men of Firestorm has always been a dynamic thatÂ Legends of TomorrowÂ has explored; however, both Jax and Stein received more spotlight than usual in “Crisis On Earth-X,” and the scenes between them earlier on in the crossover, in which they both expressed their love for each other as family not just friends, allowed Stein’s sacrifice and his goodbye to Jax to be even more profound and beautiful than expected. Plus, Victor Garber and Franz Drameh were sensational during their final moments on screen together.

There were also other smaller but still very powerful scenes reflecting different types of love as well. Alex and Sara connected over their dedication to their sisters, which added more depth to the fun fling the two characters had during “Part 1.” Kara and Felicity showed that they were both willing to sacrifice their lives to protect each other, despite the fact that they had only met once before Barry and Iris’s wedding. And lastly, Earth-X Felicity found herself imprisoned and nearly executed after risking her life to help other innocent victims; this short scene, along with Felicity mentioning that her grandparents were Holocaust survivors, didn’t fully assuage my concerns about Nazis serving as the crossover’s villains but did prove to me that the DCTV writers put a little more thought and care into the storyline than I initially believed.

While I watched in awe when Kara and Evil Kara had their first flying fight, cheered when Felicity and Iris took down the Earth-X guards at STAR Labs all by themselves, and yelled out “Yes!” when Oliver shot and killed the Earth-X version of himself, those moments won’t be burned into my memory the same way that these more intimate scenes from “Crisis On Earth-X” will be. As I said in my review of “Part 2” on Monday night, these superhero series are at their very best when they examine these comic-book characters not as larger-than-life figures but as real, flawed individuals, who experience fear, hope, and, of course, love. That’s where the best superhero stories come from, and I hope the DCTV creative team keeps that in mind for the rest of the season for each of these four shows and for when all these awesome heroes meet up again in next fall’s crossover.