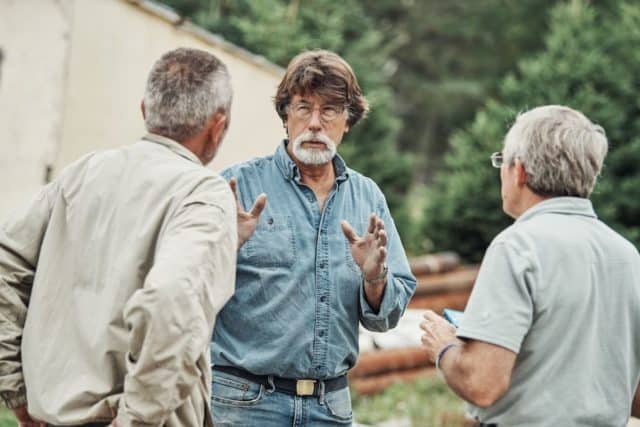 The exciting first episode of Season 5 of the Curse of Oak Island just aired. As loyal fans know, the series has been long on theories and short on discovery moments, with plenty of speculation thrown into the mix. There are a few theories which have continued as threads throughout the seasons, with finds here and there to point toward them. Explaining the mysteries of Oak Island has been a process of gathering the finds, and the threads, and simply presenting them for consideration.

The Lagina brothers have spent hours considering various intellectual theories about the island. They have explored historical evidence, modern myths, and educated guesses. For this reason, the theory brought forth by Norwegian writer and film documentary film maker Petter Amundsen is substantial. The Lagina brothers have followed Amundsen’s work for more than a decade.

Here’s a TEDx Talk with Petter Amundsen about his work with mysteries he’s found in the works of Shakespeare:

Amundsen traveled to Oak Island to explain his fantastic theory. Amundsen believes that the works of William Shakespeare hold the keys to the Oak Island mystery. He methodically describes hidden codes and maps in Shakespeare’s writings which point the way to Oak Island and its treasure. Amundsen created a documentary about his ideas which is called Shakespeare: The Hidden Truth. Included are some unorthodox premises:

Amundsen’s theory is put to the test in this episode; as the team seeks out the stone markers to prove his assertions. As is typical of Oak Island attempts, nothing conclusive is discovered. But the Lagina brothers promise to continue their search for the Mercy stone which Amundsen believes is the gateway to an underground treasure vault. Rain and Amundsen’s time constraints cause a standstill to this line of exploration, but it is one of the most fascinating of the series’ theories.

The team discovers an antique Spanish copper coin. They have a coin expert clean it to learn its date. After an hour wait, the coin reveals its astonishing, though faint marks. The expert believes it is dated from 1652. The coin causes increased interest in the treasure search.

In this episode, the Lagina brothers consider that a coin they’ve discovered may have a Templar cross engraved on its surface. A team member, who happens to be a Mason, tells the Laginas that the Templars served as the first bankers, creating the services and functions which ultimately developed the modern-day banking system. The brothers include the Templar theories as significant to their treasure hunt.

The team hopes for a breakthrough discovery using sonar; searching under water off the island’s southern shore. They discover a triangular shaped stone. It’s pointing straight toward the location of a triangle of stones, which point toward the original Money Pit.

In the next series episode, they dive for the triangular rock, and have the diver mark its location. The diver finds a second triangle rock pointing toward the Money Pit. These curiosities add to the various items considered to be markers leading toward island treasure.

The team finds what is deemed to be the most important item found on the island to date. The season had already been filled with dubious findings and increased speculation over various theories. Highlights included:

At the episode’s end, the team declares victory, based on the various findings. They plan to return to the island the following year to explore the swamp, the Money Pit, and Smith’s Cove. Looking forward to Season 5, fans are:

What do these five moments mean to loyal fans? The best statement so far may be that the true treasure of Oak Island is the Lagina brothers. Why? They’ve taken on their quest creating a family of seekers. Their one end goal of preserving the island and ultimately returning it to a state of natural existence is admirable. If achieved; it could be awesome.