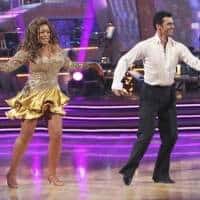 Wendy Williams and partner Tony Dovolani were voted off Dancing with the Stars in week 3, and this was hardly a shocker. Scoring a sorry 15, the spread between her and Sugar Ray and Romeo, both tied at 20, was too wide to overcome. While Wendy certainly had a Wendy Williams Show fanbase, apparently she was not a DWTS fan or judge favorite.

The other two couples who found themselves in jeopardy were Kendra Wilkinson & Louis Van Amstel and Chris Jericho & Cheryl Burke. And then the heart thumping moment came down to Wendy and Chris. See the video below. Host Tom Bergeron was quick to point out that Wendy and Chris were not necessarily the bottom two, even though one of them was definitely going home. I really don’t know how that’s possible. If Wendy wasn’t in the bottom, why would she be eliminated? I have to assume the comment was more for Chris and Cheryl’s benefit. So in effect, we really don’t know who else lags behind in fan votes.

On a brighter note, tonight’s show featured pro dances from Lacey Schwimmer & Dmitri Chaplin and Mark Ballas & Chelsie Hightower. It’s always a treat to watch the beloved pros do what they do best with each other.

Next week’s theme is Classical Night, with 2 hours of new dances set to classical music, and featuring a performance by violinist David Garret. Dancing with the Stars week 4 performance show airs on April 11 at 8 p.m. (EST) on ABC.