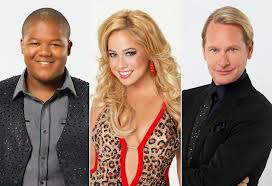 The Dancing with the Stars Season 15 All Stars cast line up was not complete until this morning, when Good Morning America announced the 13th celebrity contestant, Sabrina Bryan.  Up against Carson Kressley and Kyle Massey in an online viewers’ choice voting campaign, Sabrina beat out her competitors and will appear with pro partner Louis VanAmstel on the new season.

All three celebrites peformed together in the Dancing with the Stars Las Vegas show, which recently ended its successful four month run at the Tropicana Las Vegas. Since the formal cast annoucenment in July, Sabrina, Kyle and Carson have been running campaings on social networks and television worthy of any political candidate, complete with TV ad spots. Sabrina Bryan, former member of Disney’s Cheetah Girls, was famously voted off in a huge upset during week 6 of Season 5  despite being one of the better dancers of the season. Ironically, she is voted in to Season 15 and gets her chance at redemption on the ballroom floor.

Sabrina and Louis join the rest of the Dancing with the Stars Season 15 All Stars cast: