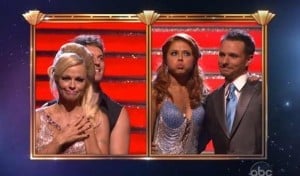 After a dreadfully long two hour Dancing with the Stars: All-Stars results show, we finally learned that Pamela Anderson and partner Tristan MacManus were the first all-star couple to be sent packing. Not that we didn’t expect it, given her bottom score and sleepy performance. The first week of Dancing with the Stars typically weeds out the worst of the pack. In a cast full of former champs and runners up, Pamela was the only one who could not claim either of those honors. The only reason then, to have her in the cast at all had to be token train wreck casting.

In a bit of a shocker, we found out that Drew Lachey and partner Anna Trebunskaya were in the bottom two. This was shocking because Drew never once made the bottom two during Dancing with the Stars Season 2 when he won the MirrorBall. And last night, he was safely tied at 5th place with Helio Castroneves and Kelly Monaco. What this tells us is he lacking a strong fan base. Will he be able to turn that around in time for next week? Bristol Palin was also placed in jeopardy, but it was not revealed if she was truly “bottom three”. Apparently the Tea Party is alive and well and voting, as is partner Mark Ballas’ fan base. She didn’t suck, but she wasn’t as good as Drew. Just being honest.

In an extremely awkward and almost cruel ‘mishap’ so characteristic of Dancing with the Stars, Sabrina Bryan and Lous VanAmstel were made to think they were safe before they actually were. While they were awaiting their fate on stage with two other couples, Tom Bergeron announced: “Emmitt and Cheryl and Gilles and Peta……(long pause)….you’re ALL safe” at which point Sabrina and Louis assumed that included them, so they jumped up and down with relief. Until Tom clarified “the ones I named are safe”. Awkward dead silence set in and another long pause, until Brooke Burke Charvet announced that the couple was indeed safe. In the chaos, Gilles yelled something toward Tom and Brooke (or the producers?) but was bleeped. Cursing them out no doubt! Good thing Tom already won his Emmy.

Update: I decided to Tweet Tom about this, and busted his chops a little. His reply cleared up the confusion:

@LadyJmeow Turns out they couldn’t hear me UNTIL I said, “all safe.” They didn’t know I’d only mentioned two couples’ names. #LiveTVfun