Home
Dancing With The Stars
Dancing with the Stars: Hope & Maks Are ‘No Shows’ for Interviews 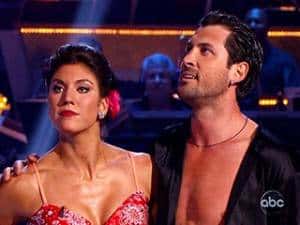 Dancing with the Stars eliminated Hope Solo and Maks Chmerkovskiy in the Semifinals, but what happened next is nothing short of bizarre. Hope and Maks seemed to vanish. It’s protocol for eliminated contestants to appear on ABC’s Jimmy Kimmel Live on results night, and on Good Morning America the morning after. Both shows hosted the three final three, with neither Hope or Maks anywhere in sight. Where were they?

The only press Hope did was an interview backstage after Dancing with the Stars, but it ended abruptly after she fled in tears. Read E!’s account of what happened here. Maks didn’t do any press after the show.

At first it was thought she chose not to, beause her rep told E! she was too emotional for interviews. But JKL promo’d the final 3 appearance even before DWTS aired and booted the couple. For her part, Hope even tweeted: I’m sitting at the airport happy as can be. I would have loved to have been on kimmel or gma to officially thank all the wonderful People I met. Especially the behind the scenes people that helped me everyday.

And then later, after being deluged by inquiring fans: I’m sorry everybody! @maksimC and I would never want to cheat our fans! We love you guys! It wasn’t our decision.

Maks himself tweeted: Would never disrespect fans by not doing press! Was told not to. And would have loved to be on Kimmel or GMA! Y’all know I like speaking ;)

So obviously it was Dancing with the Stars and/or ABC’s decision not to have them appear. Fans are absolutely up in arms about this. @dancingabc, the show’s main Twitter account, is being bombarded by ticked off fans slamming the show and threatening never to watch again for the way they perceive Hope and Maks were treated.

But what was behind it? Was it Maks’contention this season with Len and Carrie Ann? Was it because Hope told the judges in a backstage confessional to kiss her booty? The antics may have lead the show to fear either Hope or Maks would speak out of turn (and that’s putting it mildly) and hurt Dancing with the Stars’ reputation. Remember Maks’interview with GMA a couple of weeks ago. I’m sure the brass wasn’t too pleased with that. Was it punishment or protection? Probably a little of both.