Home
Dancing With The Stars
Tonight on Dancing with the Stars: It’s Latin Week!
Prev Article Next Article 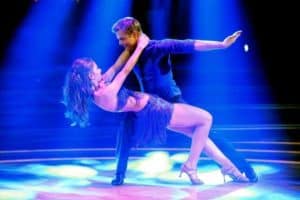 Dancing with the Stars presents Latin Week in week 5 of Season 14, and will include performances by Santana, Selena Gomez, Train and Sheila E. Pro dancer Louis VanAmstel, who has been sorely missed since Season 12, returns for pro dances with Anna Trebunskaya and Cheryl Burke on Monday and Tuesday. The “dance duel,” in which the judges will have the final say on the next couple to be eliminated, debuts on Tuesday night.

The stars and pros will put their best Latin foot forward as they dance salsa, samba and Argentine tango. Here’s who’s dancing what on tonight’s Dancing with the Stars:

This will be an interesting week on Dancing with the Stars following a recent spate of injuries, mishaps and a shocking week 4 elimination. Under all this pressure, will the gang be able to hold it together? Melissa has returned to the studio since her scary head and neck injury, tweeting that she was having a ‘gentle’rehearsal. There shouldn’t be anything for her head to bang into during a salsa, except maybe Maks’hard head, which could finish her off for sure.

Maria tweeted a mysterious statement late last week about having laser surgery. What happened to her now? Does it even matter? The woman has danced with ‘broken ribs’and a stress fractured foot. So even if both her legs were broken, I think she’d still show up and dance. No concern there. William will have the chance to redeem his messy jive with an Argentine Tango. He promised it would ‘sexy’but he needn’t worry. Even if he botches this one, we know Bruno Toniolo has his back.

With last week’s elimination of decent dancer and popular contestant Sherri Shepherd, the couples are taking nothing for granted at this point. They are sure to go all out to earn top scores to keep from being in the bottom two, especially since their fate will be decided by the judges during Dancing with the Stars’ first ever dance duel during the Results Show. The bottom two couples will have to perform a cha cha simultaenously, with the judges then deciding who stays and who goes.