Home
Movies
Danny DeVito Thinks There Should be a Matilda Sequel 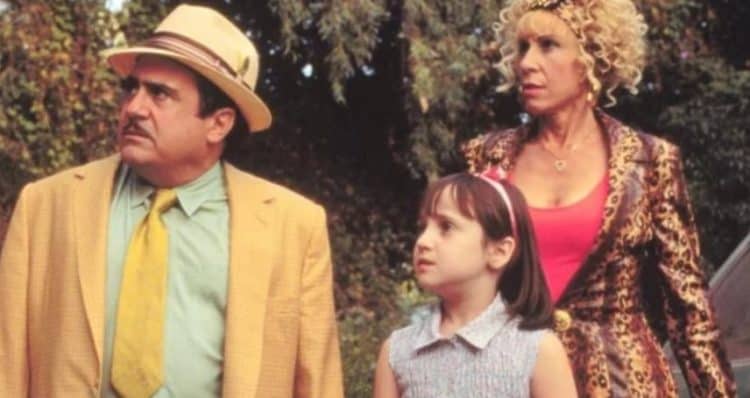 It kind of seems as though Danny DeVito is getting a little more active the older he gets since he’s now interested in a Matilda sequel that could have possibly happened around two decades ago, but is still something of an idea at this point. Getting Mara Wilson, who played the titular star, to come back would be a prospect that might have be worked on, but at this point those that were most important to the story are still alive and still capable of carrying out a sequel, so the best question now is: why not? Some people might say let it go since Matilda ended on such a high note, but DeVito seems ready to make this a reality all the same. Jeremy Dick of MovieWeb sounds as though he might want to see it happen and I’ll be honest, I can’t really blame anyone for thinking that this could work since Matilda having a child of her own and possibly a family could make for an interesting movie. Whether everyone would come back or not is a good question, but the overall plot still seems to need some work.

Would the Trunchbull come back? Would the Wormwood’s be seeking to try and find a way to reconnect with Matilda? It’s hard to say since by the end of the movie things were looking up for Matilda and Ms. Honey since the Wormwood’s were fleeing town and signed the adoption papers making Ms. Honey Matilda’s legal guardian, and the Trunchbull had been driven out of the school thanks to a few liberal applications of Matilda’s power. That seemed to wrap things up nicely, especially since Matilda seemed resigned not to use her powers as much any longer. But then you get the feeling that as a teenager she might feel the need to flex them just a bit at times, as the teenage years can be kind of daunting for a lot of kids and can pave the way to easier solutions when such things are available. But maybe, must maybe there’s a chance that after so many years of not using her powers to a greater extent that Matilda would find that she couldn’t access them as easily. It could be that her child was born with the power but didn’t know how to use it properly, which could result in a great deal of hilarity as well as drama that could unfold. That would make it necessary for Matilda to tell her family about her power and instruct her child on how to use them. Of course if she wasn’t a single parent and had a husband she’d never told about the power it could cause even more drama. And what about the Wormwood’s? What if they decided to reconnect in some way as I mentioned above? That could throw a huge wrench into the works since the family is one of the worst that any kid could be raised by.

I’m still thinking that the Trunchbull or some other, similar relative could be a good play for the second movie since Pam Ferris played a perfect part given that she was just downright nasty, both in physical appearance and attitude. The Trunchbull was there to make the lives of the kids miserable and she did a very good job of it. But if she didn’t want to come back perhaps there could be another relative that heard of what Matilda did so long ago and wanted to see for themselves, or get some payback for the Trunchbull line. After all we didn’t learn everything about Ms. Honey’s family, only enough to realize that the Trunchbull was her aunt and in the same breath was a big part of her life that she could have done without. To learn that there are more family members out there like the Trunchbull would be kind of depressing but it would also open up a big door on the story and possibly push it forward a little in terms of creating a worthy antagonist, which was one reason why Matilda was such a fun movie. Even as a teenager this was still an enjoyable movie and quite honestly kids today even enjoy it.

There’s no doubt that it would take a good deal of work to make this movie happen and would require nearly every core character to come back for at least a few scenes so as to set things up in a way that would bring a little continuity to the whole thing. Mara does seem receptive to it at least but whether or not we’ll see it happen before everyone gets too old is kind of uncertain at this time. One can hope for the best though, as this seems like a worthy idea since it’s not a reboot but a continuation of a great story.